The banks were tested to determine if they have large enough capital buffers to keep lending, even if hit with billions of dollars in losses brought on by a financial crisis and severe economic downturn. 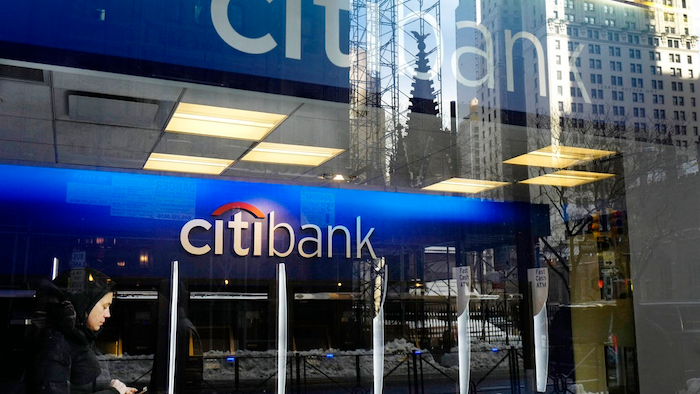 In this Thursday, March 16, 2017, file photo, a customer enters a Citibank branch, in New York. On Thursday, June 22, 2017, the Federal Reserve said all of the 34 largest U.S. banks are fortified enough to withstand a severe U.S. and global recession and continue lending. The banks undergoing the seventh annual check-up included JPMorgan Chase & Co., Bank of America Corp., Citigroup Inc. and Wells Fargo and Co., which are the four biggest U.S. banks by assets.
AP Photo/Mark Lennihan, File

WASHINGTON (AP) — All of the 34 largest U.S. banks are fortified enough to withstand a severe U.S. and global recession and continue lending, the Federal Reserve said Thursday.

The first round of the central bank's annual "stress tests" showed that as a group, the 34 big banks have gained strength thanks to a steadily recovering economy. The banks undergoing the seventh annual check-up included JPMorgan Chase & Co., Bank of America Corp., Citigroup Inc. and Wells Fargo and Co. — the four biggest U.S. banks by assets.

The banks were tested to determine if they have large enough capital buffers to keep lending, even if hit with billions of dollars in losses brought on by a financial crisis and severe economic downturn. Capital is the cushion a bank holds against losses.

"This year's results show that, even during a severe recession, our large banks would remain well capitalized," Fed Gov. Jerome Powell said in a statement. "This would allow them to lend throughout the economic cycle, and support households and businesses when times are tough."

The tests were mandated by Congress in the wake of the crisis that plunged the U.S. into the worst economic downturn since the Great Depression of the 1930s. They were designed to restore badly shaken confidence in the U.S. financial system. During the crisis, the government created a $700 billion bailout fund to stabilize hundreds of banks, large and small, across the U.S.

Nearly nine years on, banking industry profits have been steadily rising and banks have been lending more freely.

The most critical tests for the industry come next week. That's when the Fed will announce whether it has approved banks' requests to increase dividends or buy back shares. Those results will be based on how each bank would fare in a severe recession if it took those dividend or stock actions.

In the first round, under the tests' hypothetical "severely adverse" scenario, the U.S. would endure a catastrophic recession in which unemployment — now at 4.3 percent — reached at least 10 percent, home prices dropped 25 percent, the stock market plunged about 40 percent and market volatility rose sharply. The tests compare the losses projected for each bank with its capital.

The Fed said Thursday that under that scenario, the 34 banks would suffer combined loan losses of $383 billion. That's down from $526 billion in losses for 33 banks last year. The Fed said the losses would reduce the banks' high-quality capital from 12.5 percent of its loans in the fourth quarter last year to 9.2 percent at the end of 2017. The 9.2 percent level shows improvement from last year's 8.4 percent. It's far above the 4.5 percent minimum capital level and the 5.5 percent that the banks held at the start of 2009, soon after the crisis hit, the year the first stress tests were performed.

All the banks can now amend their plans on dividend payments and stock buybacks to win Fed approval before it announces its decisions on those issues next Wednesday. Increasing dividends costs money and the government doesn't want banks to shrink their capital reserves, making them vulnerable in another recession.

In last year's second round, the Fed barred U.S. businesses of two European banks, Germany's Deutsche Bank and Spain's Santander, from raising dividends or boosting stock buybacks. It was the third straight year that the Fed rejected the plan of the U.S. division of Santander, which is one of Europe's biggest banks, and the second straight rejection for Deutsche Bank Trust Corp., the U.S. transaction bank and wealth management business of Germany's largest bank. The regulators said that, although there have been improvements, the banks continue to show weaknesses in supervision that could harm their capital planning.