The government is suing because diesel pickup trucks and Jeep SUVs allegedly cheated on emissions tests. 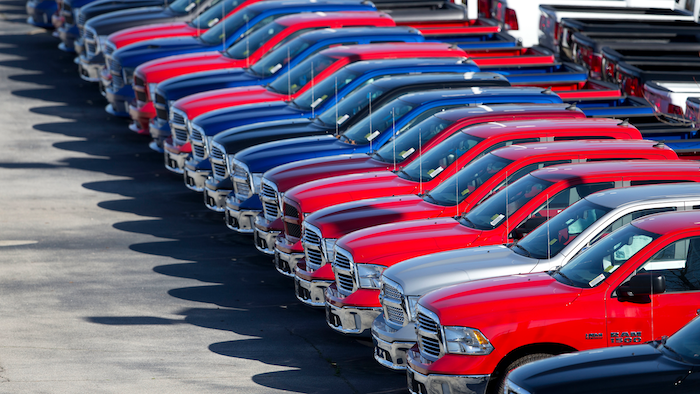 In a lawsuit filed Tuesday, May 23, 2017, the U.S. government is suing Fiat Chrysler, alleging that some diesel pickup trucks and Jeeps cheat on emissions tests. The Justice Department lawsuit alleges that nearly 104,000 Ram pickups and Jeep Grand Cherokees from the 2014 to 2016 model years have software that allows them to emit lower amounts of pollutants during lab tests by the Environmental Protection Agency than during normal driving conditions.
AP Photo/John Bazemore, File

The lawsuit filed Tuesday by the Justice Department marks the second time the government has gone after an automaker alleging use of software on diesel engines that allows them to emit more pollution on the road than during Environmental Protection Agency lab testing.

Last year, the government accused Volkswagen of cheating on tests, and the company ended up pleading guilty to criminal charges in a scandal that cost VW more than $20 billion in the U.S. alone.

In the latest case, the government alleges that FCA put eight "software-based features" on diesel engines in nearly 104,000 Ram pickups and Jeep Grand Cherokees from the 2014 to 2016 model years. The software allowed the vehicles to emit fewer pollutants during lab tests by Environmental Protection Agency than during normal driving conditions.

The 3-liter FCA diesels emit nitrogen oxide at a much higher rate than allowed under federal laws when on the road, the EPA says in a statement. The company failed to disclose the software during the process to become certified so the vehicles can be sold, according to the EPA. The agency called the software a "defeat device" that changes the way the vehicles perform on treadmill tests in a laboratory.

"Each of these vehicles differs materially from the specifications provided to EPA in the certification applications," the statement said. "Thus the cars are uncertified, in violation of the Clean Air Act."

The Italian-American automaker said in a statement Tuesday that it is disappointed the government filed the lawsuit because it has been working with the EPA for many months to clarify pollution control issues. FCA has contended that unlike VW, it did not install the software with intent to cheat on tests.

"The company intends to defend itself vigorously, particularly against any claims that the company engaged in any deliberate scheme to install defeat devices to cheat U.S. emissions tests."

The EPA issued a "notice of violation" against FCA, exposing the software in January. At the time, FCA CEO Sergio Marchionne denied any wrongdoing and said the agency was blowing the issue out of proportion.

The lawsuit filed in Detroit federal court seeks an order stopping the practice as well as civil penalties, according to the EPA statement. The agency and the California Air Resources Board still are discussing with FCA ways to make the vehicles comply with federal and California pollution laws. FCA says it still hopes to resolve the matter in negotiations.

"The nature and timing of any resolution of this issue are uncertain," the EPA statement said.