EPA Head: 'Regulatory Assault' on Coal Mining is Over 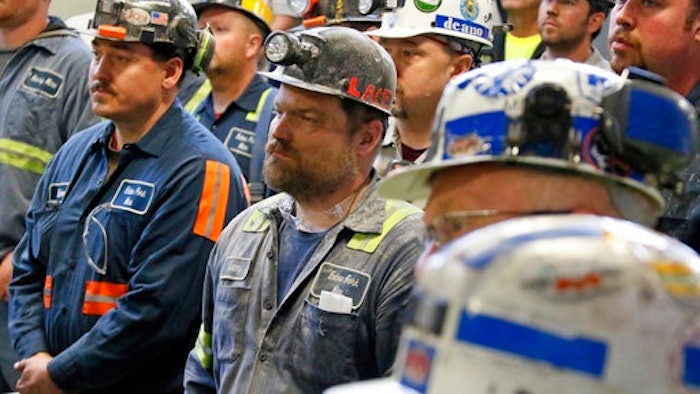 SYCAMORE, Pa. (AP) — Environmental Protection Agency Administrator Scott Pruitt told dozens of Pennsylvania coal miners Thursday that the "regulatory assault" on their industry is over, and that the environment can be protected without hurting business.

"We're going to do it the American way, grow jobs and show the rest of the world how it's done," Pruitt said before going on a mine tour about 50 miles south of Pittsburgh.

"The regulatory assault is over," he said, referring to tightened environmental and other regulatory standards on coal and other energy industries under former President Barack Obama. "We're going to partner together with you."

Pruitt spoke for less than five minutes to about 100 workers at the Harvey Mine, one of three comprising the nation's largest underground coal mining complex. It's run by CNX Coal Resources.

He did not take any questions from the news media, which did not accompany him on the underground tour.

As Oklahoma's attorney general, Pruitt sued the EPA more than a dozen times to challenge environmental regulations opposed by the fossil fuel industry.

Pruitt didn't address whether the administration intends to withdraw from the international climate agreement, which sets ambitious goals to lower carbon-base pollution. The executive order could make it more difficult for the U.S. to hit its carbon reduction benchmarks.

Several of the nation's largest coal companies were forced to seek bankruptcy protection in the last year as electric utilities switch to cheaper, cleaner-burning natural gas made more plentiful through a drilling technique known as hydraulic fracturing, or fracking. The cost of building renewable energy projects also continues to fall, with wind turbines now producing emissions-free electricity cheaper than coal in many parts of the country.

CNX spokesman Zachery Smith said the three mines employ 1,500 people, about the same number who worked there throughout the Obama administration. But miners now are working full time and with weekend overtime. Many worked just three or four days a week when demand for coal bottomed out in 2014 and 2015.

Kevin Carson, 30, a married father of one, works in the mine's processing plant, where rock is cleaned away from the coal. He went to work for the company 10 years ago right out of college, where he got a degree in industrial technology.

"I'd say we are optimistic. It's a little more positive now, that the coal markets are starting to pick up," Carson said.

Mines "provide a great deal of support for the local economy," he said.

Rachel Gleason, executive director of the Pennsylvania Coal Alliance, said the organization is "cautiously optimistic" conditions will improve for the industry.

"It's very early in the administration, but in the past eight years we've seen a systematic attack on the industry from top to bottom," she said.