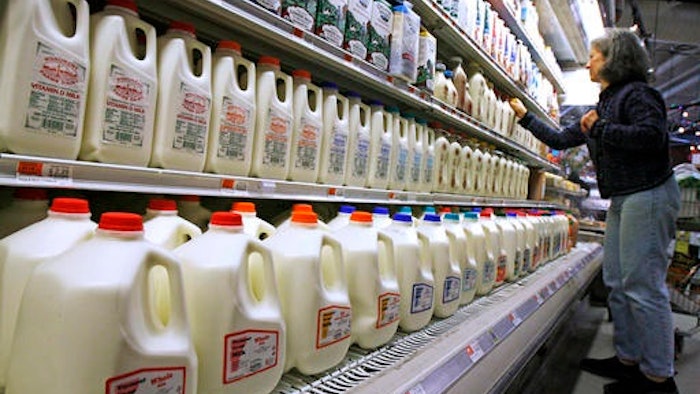 NEW YORK (AP) — The former chairman of Dean Foods told jurors at a criminal trial Tuesday that he fed secrets about the company to a professional gambler for over seven years, sometimes speaking in coded language over a prepaid cellular phone called the "bat phone."

Prosecutors say Walters encouraged friends including professional golfer Phil Mickelson to buy stock in Dean Foods Co., a Dallas-based company that is one of the nation's largest processors of milk for retailers.

Mickelson, who may testify later in the trial, was never charged criminally. But he did agree to return $1 million he earned in 2012 after Walters suggested a stock trade.

Davis was testifying in a bid to win leniency after pleading guilty to federal insider trading charges including securities and wire fraud.

Davis told jurors he told Walters secrets about Dean Foods, including earnings information and upcoming pivotal transactions, for over seven years, ending in 2014, because he thought Walters might share gambling tips or other information that might benefit him.

He said the men bonded quickly after meeting at a golf course in the mid-1990s, indulging in conversation about their common interests, including sports, golf, gambling and businesses.

The sharing of information about Dean Foods began modestly but he eventually shared secrets "more times than I can actually recall," he said.

Davis, nonexecutive chairman of Dean Foods from May 2013 until his August 2015 resignation, said the nature of the relationship changed after he borrowed nearly $1 million from Walters.

"I became indebted to him," Davis said. "He became more demanding of information."

The Harvard-trained Davis said Walters gave him a "so-called burner phone," asking him to use it whenever they spoke about Dean Foods.

"We called it the 'bat phone,'" Davis said. "He also told me to refer to Dean Foods as the 'Dallas Cowboys' as we moved forward, and I did."

Davis said he shared extensive information about Dean Foods with Walters in 2011 and 2012, when the company was preparing to spin off a section of its business.

In May 2014, two FBI agents visited Davis at his Dallas home, saying Walters had earned between $16 million and $17 million on trades involving Dean Foods between May 2012 and August 2012.

He said he lied to the agents and to the Securities and Exchange Commission in May 2015. He said he threw the "bat phone" into a Dallas creek.

"I used very poor judgment and I was scared to death that I had made some terrible mistakes and I wanted to cover it up," he said. "I lied to everybody."

He said he decided to tell the truth and cooperate after suffering a stroke in November 2015 and realizing the toll the investigation had taken on his health.