The lawsuit claims the veterinarians, all from Mexico, were illegally forced to work as general laborers despite having professional worker visas, and were threatened with deportation. 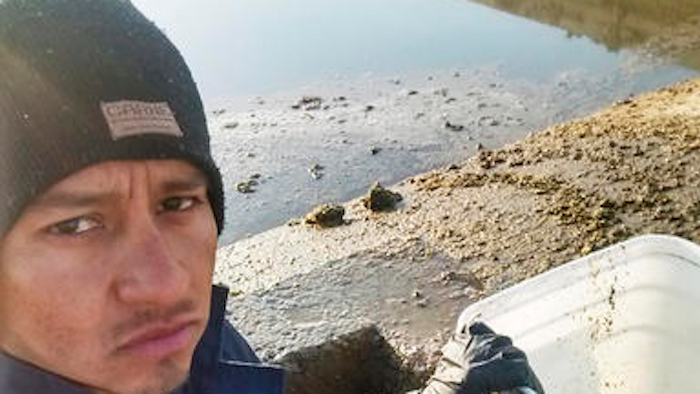 This 2015 self-portrait by César Nerón Martínez Rodríguez shows him at work at the Funk Dairy in Murtaugh, Idaho. He is one of six veterinarians who say they were recruited from Mexico to work at the Idaho dairy farm as animal scientists, but were instead forced to work as laborers, milking cows and shoveling manure for about a year. On Tuesday, Jan. 3, 2017, they filed a federal human trafficking lawsuit against the dairy's owners and the lawyer who arranged work visas.
César Nerón Martínez Rodríguez via AP

BOISE, Idaho (AP) — Six Mexican veterinarians who say they were recruited to work at an Idaho dairy farm as animal scientists have filed a federal human trafficking lawsuit against the dairy's owners and the lawyer who arranged work visas, claiming they were instead forced to work as laborers, milking cows and shoveling manure for about a year.

The veterinarians had been promised that they would oversee animal health and reproduction programs at Funk Dairy Inc. in the small southern Idaho town of Murtaugh and were brought to the U.S. on TN visas for professionals from Mexico and Canada, said the lawsuit filed in U.S. District Court in Boise on Tuesday.

Named as defendants were Funk owner David Funk, manager Curtis Giles and attorney Jeremy Pittard, who the lawsuit said arranged their visas. The telephone rang unanswered Wednesday at the dairy. Pittard, a public defense and family immigration attorney, said he did his job after being asked by Funk Dairy to help arrange the visas but could not comment on working conditions for the veterinarians.

The lawsuit claims the veterinarians were illegally forced to work as general laborers despite having professional worker visas, received substandard housing and lower wages than promised and were threatened with deportation if they did not do their assigned work well. They are seeking unspecified monetary damages under federal laws to fight human trafficking and target criminal conspiracies.

The alleged trafficking scheme represented "the fraudulent recruitment of professional Mexican veterinarians for the purpose of evading U.S. immigration laws and hiring workers as low-wage, general laborers," the lawsuit said.

Veterinarians Cesar Martinez-Rodriguez, Dalia Padilla-Lopez, Mayra Munoz-Lara, Brenda Gastelum-Sierra, Leslie Ortiz-Garcia and Ricardo Neri-Camacho also claimed in the lawsuit that their employers exploited their fear, inability to speak English, and unfamiliarity with the American legal system to force them to stay at the dairy from 2014 to 2015.

"I'm not sure I can speculate as to why the company chose this route, but in general agriculture companies have been struggling with labor shortages," said the lawyer for the veterinarians, Edgar Ivan Aguilasocho . "As far as we can tell, this criminal conspiracy was aimed at providing a makeshift solution to that kind of shortage."

The veterinarians said they were promised pay of $10 an hour with an opportunity for higher pay, transportation to work, living accommodations, a $2,000 bonus after one year of work, one week of paid vacation and reimbursement for travel back to Mexico.

Most are in their 20s and learned about the job from postings from prospective employers at three different Mexican universities that have veterinary schools, Aguilasocho said. The pay offered was similar to what young veterinarians make in Mexico, he said, and all saw the opportunity to work on an American dairy farm as a promising way to gain valuable career experience.

Munoz-Lara said she was heartbroken when she started her first day at work and learned she would be doing 12-hour shifts milking cows, moving cattle around, cleaning pens and collecting garbage.

"It was a total disappointment because we had hoped to excel in our field," she said, adding that she and the other veterinarians hope publicity about their case serves as a warning to other Mexican professionals to be wary about U.S. recruitment opportunities.

The veterinarians said in their lawsuit they were placed in dirty and overcrowded housing, then charged rent after being moved to better housing.

The veterinarians also said they were denied meal breaks, were forced to eat meals at unhygienic work stations around cows and that there wasn't enough protective equipment and portable toilets at the site for all of the dairy's workers.

When one veterinarian suffered a back injury and another had part of a finger amputated in an on-site accident, they said they were not provided adequate medical treatment or time off, the lawsuit said.

They left after the dairy terminated their contracts in late 2015, the lawsuit said. Munoz-Lara said she waited until she was awarded the $2,000 bonus and quit, staying so long at the dairy doing menial work because she had debts she had to pay off.

Several of the veterinarians subsequently found work as animal scientists at other U.S. dairies and one is now doing veterinary work in his home Mexican state of Jalisco, Aguilasocho said.

Pittard said Funk Dairy had referred him to another lawyer in a different state for guidance on arranging professional visas for the veterinarians.

He declined comment on working conditions at the dairy because he did not visit it but said the operation has a reputation for being proactive and taking care of its workers, and that the lawsuit came as a surprise.

"I believe the dairies are just trying to find ways to have a legal workforce," he said. "I didn't do anything wrong, I just filled out the paperwork. I helped people get here with a visa."

Automakers say the measure will fill the country with junk cars.
Oct 14th, 2021
Follow Us
Most Recent