Proposed legislation could reduce the financial benefits of solar users. Utilities feel this levels the playing field, while the solar industry feels its being bullied by big companies with political connections. 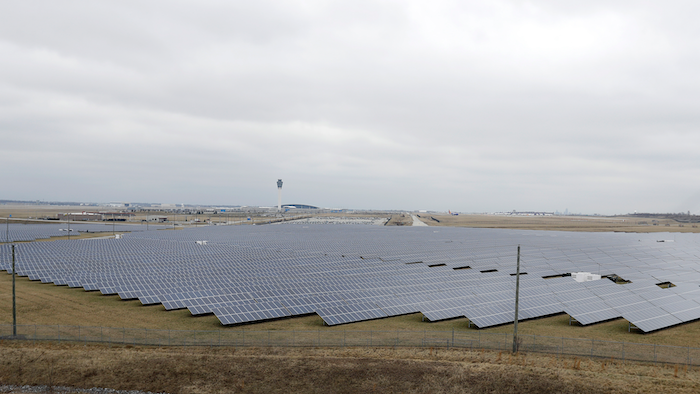 The solar farm at the Indianapolis International Airport is pictured, Wednesday, Feb. 8, 2017, in Indianapolis. Duke Energy and other utilities are backing measures in the Indiana Legislature and several other states that would eventually end the ability of small operators to produce solar power.
AP Photo/Darron Cummings

Solar power provides only about one percent of the country's energy, but the industry is growing rapidly, with figures showing it employed 208,859 workers in 2015. That amounts to a 125 percent increase since 2010, according to the U.S. Department of Energy.

But much of the growth has been in residential and commercial installation, including homes and stores. That could eventually raise costs and eat away at the business of the big utilities — in Indiana they are Duke Energy, Vectren and Indiana Michigan Power — which have a powerful voice and donate handsomely to the political campaigns of lawmakers.

On Thursday, Indiana legislators will begin debating a proposed law that would eventually eliminate much of the financial benefit Indiana homeowners, businesses and even some churches currently reap harvesting the sun's rays. It would tilt the market more in favor of the utilities, critics said.

Republican state Sen. Brandt Hershman's bill would sharply curtail the benefits of a practice called net metering for solar panel owners, which enables them to feed excess energy into the power grid in exchange for a credit on their bill.

An amendment he is proposing would end the current way of doing things within five years and lock in a substantially lower rate of reimbursement for solar panel owners — a move that solar advocates say would make it difficult to break even during the useful life of a solar panel. Hershman says that could change as the technology becomes more efficient.

The measure comes as investor-owned utilities across the U.S. are also looking to take advantage of the plunging costs of sun-generated power and carve out a share of the market for themselves. "I have nothing against solar. I'm simply trying to reset the marketplace," said Hershman, who says solar panel owners are reimbursed at a rate that gives them an unfair advantage.

But critics say it amounts to the utilities muscling out the small companies, potentially threatening the 1,500 jobs the Solar Foundation estimated in 2015 that the industry had created in Indiana alone.

"Utilities like solar if they can control those assets," said Ryan Zaricki, who owns Whole Sun Designs, a solar panel installation company headquartered in Evansville. Zaricki, who employs five workers during busy months, said that if the bill passes "it means that, in the long term, I won't have a business."

Instead, utilities are starting to promote an alternative called "community solar." The model involves customers agreeing to buy or lease solar panels from the utilities on large panel farms.

Duke Energy Corp., the largest electricity company in the United States, this year plans to launch a "community solar" program in South Carolina and seek regulatory permission to do the same in North Carolina, Florida, Kentucky and Ohio, as well as Indiana, utility vice president Melisa Johns said.

The proposed Indiana law comes after a number of other states including Michigan, Illinois and Iowa have adopted policies that would phase out net metering at a gentler pace, according to advocates. In Maine, Republican Gov. Paul LePage last year vetoed a bill that would have overhauled the state's approach. Montana is also considering a range of bills that would alter its policy, according to the National Conference of State Legislatures.

Utilities say the current Indiana system of compensation is unfair because it requires them to pay solar panel owners for power at retail cost — which is more than it would cost them to produce the same amount of energy. They also stress that they own the infrastructure solar panel owners rely on to feed their excess power onto the grid and should be compensated for it.

"The simple logic for us is if you're using it, you should pay for it," said Mark Maassel, president of the Indiana Energy Association, which represents the state's largest power utilities.

Jeffrey R. S. Brownson, a solar expert and engineering professor at Penn State University, says he has not seen data that suggests the small amount of solar energy generated in the U.S. is unduly taxing on the power grid. "This is very reactionary," he said of Hershman's bill. "It's definitely going to stymie innovation and slow down job growth."

In Indiana, It's just the latest measure pushed by Republicans, who dominate the Statehouse, which would corner a market, or benefit longtime political allies and campaign donors.

A bill last week that would have effectively blocked electric car maker Tesla from selling in Indiana was overhauled after an outpouring of opposition. And last year lawmakers passed vaping industry regulations that created a monopoly for one security firm that became the sole gate keeper of who could manufacture and sell the nicotine-laced liquid consumed through vaping. GOP leaders pledged to "fix" the law this year after the FBI launched a probe.

Over the past three years Duke energy and its affiliated political committees have funneled $76,000 to state Senate members of both parties. Hershman has collected $9,000 from the company since 2010, according to state campaign finance records.

The utilities also donated more than $1 million to the Indiana Economic Development Corporation, which helped finance trade missions former Governor Mike Pence led to Canada, Germany, London, Israel and China in 2014 and 2015, according to records obtained through a public records request.