Mark Fields said Trump and automakers have discussed emissions and gas mileage requirements that were finalized by the EPA in the waning days of the Obama administration. 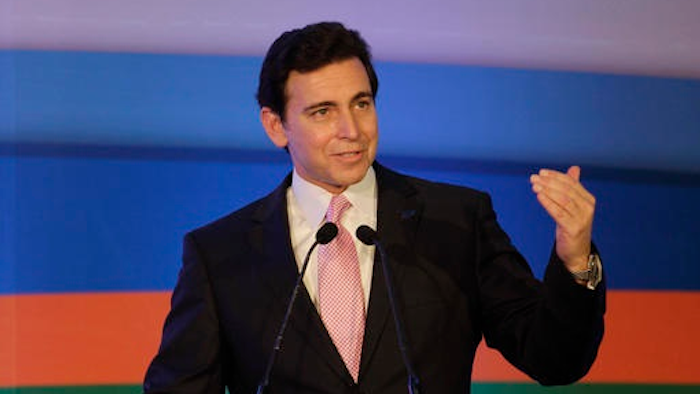 The comments from Chief Executive Mark Fields came Thursday, two days after he and his counterparts at Fiat Chrysler Automobiles and General Motors Co. met with Trump at the White House.

Fields said on a conference call after Ford announced its 2016 earnings that they discussed emissions and gas mileage requirements that were finalized by the Environmental Protection Agency in the waning days of the Obama administration. "We may see some actions on that which could be positive for our business," Fields said.

On Tuesday, Trump reiterated his warnings that companies making products such as cars in Mexico and shipping them to the U.S. could be hit with a tax. But he also said environmental regulations have gotten "out of control," an indication he could implement less-restrictive fuel economy standards.

Fields downplayed the potential impact of a border tax on Ford, saying it could actually help the company because a large percentage of its vehicles and parts are produced in the U.S. Chief Financial Officer Bob Shanks said Ford is in better shape than some competitors who ship more goods in from south of the border.

A week before Trump was inaugurated, the EPA moved to cement strict fuel economy requirements that force the auto industry to make new cars and trucks significantly more efficient.

The EPA completed a required midterm review of the standards put in place in 2012 and decided they should not be relaxed as requested by the auto industry. The action kept in place pollution reduction targets for the years 2022-2025. That means the fleet of new cars will have to average 51.4 miles per gallon by 2025, up more than 18 mpg from the 33.2 mpg requirement in 2015, the most recent year available.

Fields said the CEOs and Trump discussed having one national fuel economy standard instead of different numbers from two federal agencies and the state of California, giving the first details of the meeting.

Fields said there should be a balance between the cost of cars, creating jobs and protecting the environment. The auto industry contends that meeting the current EPA standards will add hundreds of dollars to the price of a vehicle.

The EPA under Obama said that the technology is available to meet the pollution and gas mileage standards, which vary with the percentage of trucks and SUVs sold. It said the cost to consumers would be relatively small and be made up with savings at the gas pump.

Fiat Chrysler CEO Sergio Marchionne, also said Thursday that Trump's economic policies should have a positive impact on his company. He's hoping for reduced corporate tax rates but says he's not sure what Trump plans to do. "If it does get executed, I think it will benefit us in the end," Marchionne said on FCA's earnings conference call.

Fields spoke after Ford announced that net income fell nearly 40 percent last year as a big pension adjustment and the cost of scrapping a new plant in Mexico outweighed an otherwise strong performance.

The company posted $4.6 billion in net income, down nearly $2.8 billion from a year earlier. But Ford said its pretax profit for the year hit $10.4 billion, the second-best ever, while revenue rose slightly to $151.8 billion.

Ford's 56,000 U.S. hourly workers will reap the benefits. They'll get average profit-sharing checks of $9,000 based on a pretax North American profit of just over $9 billion.

But with slowing sales expected in the U.S., Ford's most lucrative market, and big investments in electric and autonomous vehicles, the company said it expects 2017 profits to be strong but lower than last year.

For the fourth quarter, the Dearborn, Michigan, automaker posted a $783 million net loss compared with a $1.9 billion profit a year ago.

The loss was due largely to a $3 billion noncash adjustment of pension obligations and a $200 million charge for halting construction of the Mexican factory.