The Alliance of Automobile Manufacturers, a lobbying group that represents 12 automakers, called the quick decision a "premature rush to judgment" and said it has asked Trump to review post-election regulations. 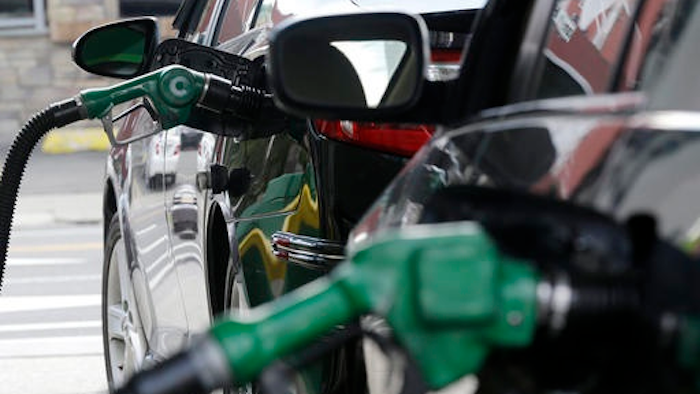 The Obama administration has decided not to change government fuel economy requirements for cars and light trucks despite protests from automakers.
AP Photo/Julio Cortez, File

DETROIT (AP) — The Obama administration has decided not to change government fuel economy requirements for cars and light trucks despite protests from automakers.

The decision means that automakers, at least for now, will still have to meet strict fuel economy requirements and that companies likely will continue building small cars and electric vehicles still even though people are buying more SUVs and trucks.

The standards had required the fleet of new cars to average 54.5 miles per gallon by 2025. But there was a built-in reduction if buying habits changed, dropping the number to 50.8. Environmental Protection Agency Administrator Gina McCarthy said in a statement that based on the agency's technical analysis, automakers can meet emissions standards and mileage requirements through 2025.

The standards will increase the new-vehicle fleet's average gas mileage requirement from 34.1 mpg this year. That will dramatically cut carbon pollution and save U.S. drivers billions in gas costs, the EPA said in a statement Wednesday.

"Although EPA's technical analysis indicates that the standards could be strengthened for model years 2022-2025, proposing to leave the current standards in place provides greater certainty to the auto industry for product planning and engineering," McCarthy said in the statement.

The EPA will take public comments on the decision until Dec. 30, then McCarthy will make a final decision, a rare speedy move for a government agency. The quick approval means the decision would become final before President-elect Donald Trump is inaugurated in January, even though a final decision wasn't required until April 2018. The EPA denied that the rushed timetable was due to Trump's election.

Trump has stated that he wants to end some government regulations and has said in the past that he wants to get rid of the EPA. Leading Trump's transition team on the EPA is Myron Ebell, director of the Center for Energy and Environment at the Competitive Enterprise Institute, a libertarian think tank that gets financial support from the fossil fuel industry and that opposes "global-warming alarmism."

The Alliance of Automobile Manufacturers, a lobbying group that represents 12 automakers, including BMW, Toyota and General Motors, called the quick decision a "premature rush to judgment" and said it has asked Trump to review postelection regulations.

The standards were enacted in 2012 with approval of the auto industry and included a midterm review this year.

Janet McCabe, EPA's acting administrator for the Office of Air and Radiation, said in a conference call with reporters that automakers have multiple technological pathways to meet the standards, from direct-injection gas engines to hybrids and electric vehicles. The industry is ahead of schedule on the standards, she said. More than 100 vehicles on the market are already meeting standards set for 2020. But electric vehicles still haven't caught on. Last year EVs were less than 1 percent of U.S. new car sales.

"Leaving the standards as they are would give automakers the time they need," McCabe said.

She added that the estimated cost of the standards has fallen since they were first put in place. The cost per vehicle to meet the 2025 standards is now $825, down from $1,100 in 2012, she said. Owners can easily pay that back in savings at the pump, she said. Auto dealers have said the added cost could put new cars out of reach for some consumers.

The industry has argued that the costs, and consumers' reluctance to buy the smallest, most fuel-efficient vehicles, mean the auto industry will have difficulty meeting the requirements, which get tougher during the next nine years.

"The evidence is abundantly clear that with low gas prices, consumers are not choosing the cars necessary to comply with increasingly unrealistic standards," the Auto Alliance said.

Even if Trump rolls back the standards, the auto industry will continue to sell fuel-efficient cars in the U.S. because it has to meet mileage standards in other countries and in California. "Automakers will still be on the hook to develop and produce these vehicles and will need economies of scale to make them profitable," said Autotrader Senior Analyst Michelle Krebs.

Trump to Challenge CA on Mileage

CARB Open to Compromise on MPG