"I will be leaving my great business in total in order to fully focus on running the country in order to make America great again," Trump said. 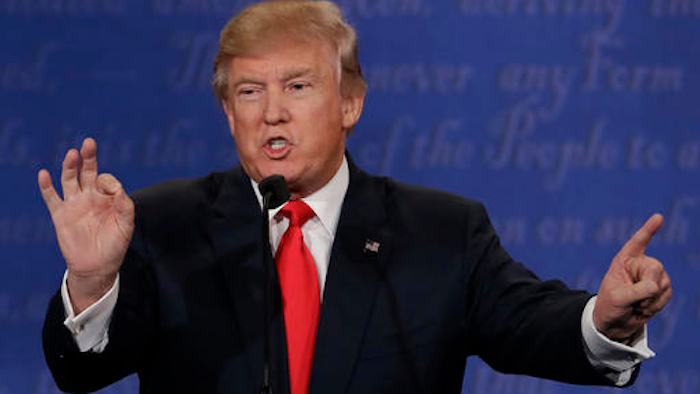 WASHINGTON (AP) — President-elect Donald Trump said Wednesday he's leaving his business empire to focus on being the nation's 45th president, declaring he can successfully avoid conflicts of interest between governing and profiting in the private sector.

"I will be leaving my great business in total in order to fully focus on running the country in order to make America great again," he tweeted in a series of missives sent before dawn. "While I am not mandated to do this under the law, I feel it is visually important, as president, to in no way have a conflict of interest with my various businesses."

Trump did not provide any details about how he planned to separate from his businesses, though he said legal documents were being prepared. He has previously said that he'd leave his business operations to his three eldest children — Donald Jr., Eric and Ivanka.

Ethics experts have pushed for Trump to fully exit the ownership of his businesses using a blind trust or equivalent arrangement.

"Otherwise he will have a personal financial interest in his businesses that will sometimes conflict with the public interest and constantly raise questions," Norman Eisen, President Barack Obama's chief ethics lawyer, and Richard Painter, who held the same post for President George W. Bush, said in a joint statement Wednesday.

Mnuchin, 53, led Trump's finance operations during the presidential campaign. But he has no government experience, which could prove a political hurdle. If confirmed by the Senate, Mnuchin would play a central role in shaping Trump's tax policies and infrastructure plans. He would also lead an agency tasked with implementing international economic sanctions.

Arriving at Trump Tower Wednesday morning for meetings, Mnuchin said the administration planned "the most significant middle income tax cut since Reagan." He also called for lowering corporate taxes to encourage companies to stay in the United States.

Trump was accompanying his decision to line his Cabinet with financial industry insiders with an announcement that the air conditioning giant Carrier Corp. planned to keep nearly 1,000 jobs in Indiana instead of moving them to Mexico. Trump and Vice President-elect Mike Pence, the outgoing Indiana governor, planned an event with Carrier officials Thursday to announce the plan.

Details of the agreement were unclear. Trump spent much of his campaign pledging to keep companies like Carrier from moving jobs overseas, relying on the skills he used in business.

Trump's sprawling business empire is unprecedented for a sitting president, as is the complexity and opaqueness of his financial holdings. He refused to release his taxes during the campaign, citing an ongoing audit, and will be under no legal obligation to do so in the White House.

Trump owns golf clubs, office towers and other properties in several countries. He holds ownership stakes in more than 500 companies. He has struck licensing deals for use of his name on hotels and other buildings around the world and has been landing new business in the Middle East, India and South America.

Reince Priebus, Trump's incoming White House chief of staff, was vague Wednesday in describing how the president-elect planned to separate himself from his businesses, saying "that'll all be worked out."

Priebus told MSNBC's "Morning Joe," that Trump has "got the best people in America working on it." Priebus demurred when asked if Trump planned to put his businesses in a blind trust — as presidents have traditionally done — or leave them in his children's hands.

"I'm not ready to reveal that really," Priebus said.

Priebus added that Trump's business acumen and the many interests he has as a result of it are "nothing to be ashamed about." He said the country hasn't seen a president with such business holdings before and the rules and regulations "don't contemplate this scenario."