At Least One Dead, Six Hurt in BASF Plant Blast

The blast occurred at a river harbor that is used to unload flammable liquids and liquefied gas. 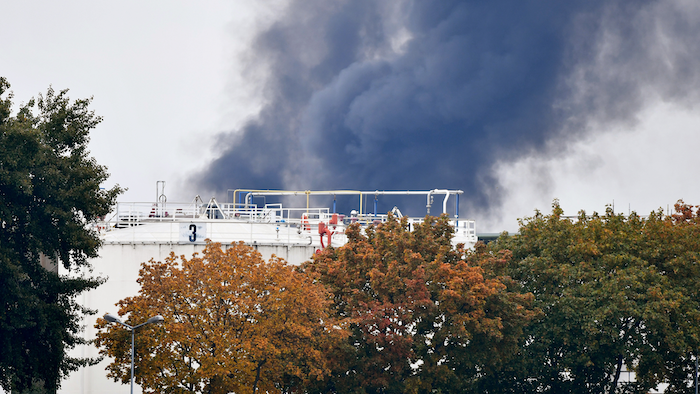 Dark smoke rises from a facility belonging to chemical firm BASF in Ludwigshafen, southwestern Germany, Monday Oct. 17, 2016. The company said that several people were injured in a late-morning explosion.
Uwe Anspach/dpa via AP

BERLIN (AP) — Authorities say that one person was killed and at least six injured in an explosion at a facility belonging to chemical firm BASF in southwestern Germany. Another six people have yet to be accounted for.

The blast occurred late Monday morning at a river harbor in Ludwigshafen that is used to unload flammable liquids and liquefied gas. BASF executive Uwe Liebelt said a fire in a pipeline was followed by the blast.

A large column of black smoke rose over the site. Residents in parts of Ludwigshafen, where BASF is based, and Mannheim, on the other side of the Rhine river, were advised to stay indoors and keep their doors and windows closed.

Search for 7 Missing After Mine Blasts Still Stalled