Don Blankenship, former CEO of Massey Energy, wrote in a blog that politicians imprisoned him for political, self-serving reasons. 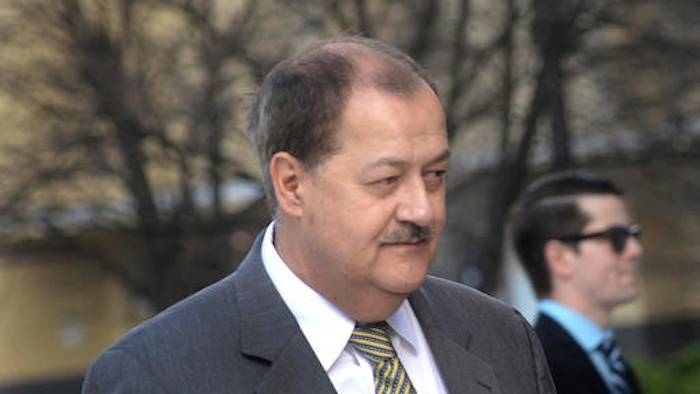 HARLESTON, W.Va. (AP) — A defiant Don Blankenship declared himself an "American political prisoner" on his blog, blaming others for the 2010 mine explosion that killed 29 men and led the former West Virginia coal operator to be imprisoned.

The ex-Massey Energy CEO said this week that he plans to distribute 250,000 copies of the 67-page diatribe in booklet form.

Blankenship reported to a California federal prison May 12 for a maximum one-year sentence for conspiring to willfully violate mine safety standards at West Virginia's Upper Big Branch mine, site of the explosion. He also paid a $250,000 fine. A jury convicted him of the misdemeanor last December.

Oral arguments in his appeal will be Oct. 26 before the 4th U.S. Circuit Court of Appeals in Richmond, Virginia.

Blankenship, 66, wrote that politicians imprisoned him for political, self-serving reasons.

He claims misconduct by prosecutors, judges, law clerks, the FBI, President Barack Obama, Sen. Joe Manchin and the Mine Safety and Health Administration.

In a statement to The Associated Press on Wednesday, former U.S. attorney Booth Goodwin calls the booklet "more Blankenship propaganda."

"Blankenship was convicted by a jury of his peers of willfully violating mine safety laws-laws designed to keep miners safe," said Goodwin, who brought the case against Blankenship. "They are the same laws that if broken, cause deadly mine explosions like the one that tragically killed 29 miners at UBB. Blankenship is in prison because of his greed, his arrogance, and his criminal behavior. This most recent stunt shows that he still has not learned this lesson: if you gamble with miners lives, you deserve to go to prison."

Manchin said in a statement issued by his office that it is "pathetic that even now, as he sits in prison, Don Blankenship is unwilling to accept any responsibility for his criminal actions. He owes better to the families of those who lost their loved ones in this avoidable tragedy."

Blankenship noted the jury found him not guilty of all three felony charges and said his indictment was the federal government's "'poster child' case of what is wrong with the American judicial system."

He said writing the booklet was "the right thing to do because all Americans deserve a fair trial, and not one like I had. It is right to do this booklet because coal miner safety is more important than political correctness."

Blankenship's attorneys believe he should not have gotten more than a fine and probation. They embraced Blankenship's image as a tough boss, but countered it by saying he demanded safety and showed commitment to his community, family and employees.

At Upper Big Branch, four investigations found worn and broken cutting equipment created a spark that ignited accumulations of coal dust and methane gas. Broken and clogged water sprayers then allowed what should have been a minor flare-up to become an inferno.

Blankenship has disputed those reports and has said he believed natural gas in the mine, and not methane gas and excess coal dust, was at the root of the explosion.

"The only difference is that this one has the money to spend a fortune on postage for his denials," he said.