Automakers that fail to sell enough electric vehicles would be required to make payments to rivals that do or pay a fine to the state. 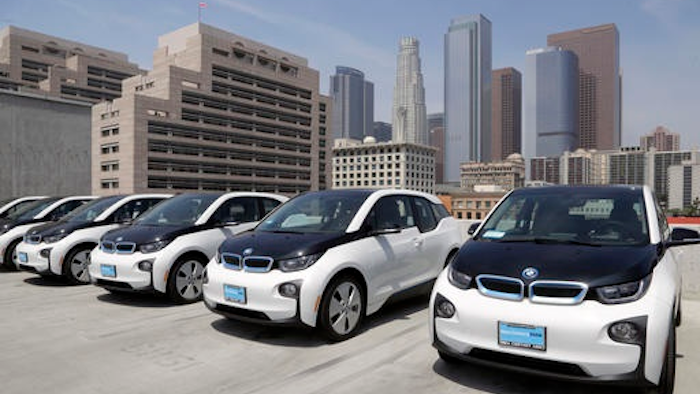 This June 8, 2016 file photo shows electric cars parked atop the Los Angeles Police Department parking lot, in Los Angeles. A California lawmaker told The Associated Press on Friday, Aug. 12, that she's introducing legislation to require that 15 percent of new vehicles be emission-free in less than a decade, a significant escalation in the state's efforts to speed the evolution of new car technology.
AP Photo/Nick Ut, File

SACRAMENTO, Calif. (AP) — With the extension of California's landmark climate change law stalled, a legislative plan is emerging to significantly up the ante on California's commitment to electric vehicles by requiring that 15 percent of all new automobiles be emission-free within a decade.

Assemblywoman Autumn Burke, D-Los Angeles, told The Associated Press on Friday that she'll introduce legislation next week to ramp up the pressure on carmakers.

Automakers that fail to sell enough electric vehicles would be required to make payments to rivals that do or pay a fine to the state.

"If we create more competition in the market, that automatically will trigger a more affordable vehicle," Burke said in an interview.

The legislation comes as an effort to extend the state's landmark climate change law until 2030 falters in the state Assembly and sets up a showdown between powerful environmental advocates and automakers in the frenzied final weeks of California's legislative session.

Because longer-range technology has advanced faster than expected, environmental advocates say, automakers have stockpiled credits for future use and won't have sufficient incentive to sell electric vehicles at affordable prices, preventing the state from meeting its goals for greenhouse-gas reduction.

"The current credit program just does not appear to be working," said Kish Rajan, a spokesman for CalInnovates, an industry group for the technology sector, and a former Brown appointee. "At least it's not working fast enough to get toward the goals that the governor has laid out and that CARB is seeking to enforce," he said, referring to the California Air Resources Board.

Vehicles that now get credits toward complying with the environmental mandates, such as plug-in hybrids, would not be eligible to meet the 15-percent mandate.

Electric and plug-in hybrid vehicles now account for about 3 percent of California new-car sales, according to the Air Resources Board, which administers California's climate laws.

Wade Newton, a spokesman for the Alliance of Automobile Manufacturers, characterized the legislation as a giveaway to Tesla Motors, which was the largest seller of electric vehicles in the United States last year. The Palo Alto, California-based company, which has never made a full-year profit, wants to grow from a niche maker of luxury vehicles to a full-line producer of affordable vehicles.

"Automakers are striving to meet California's long-term (zero-emission vehicle) program by providing consumers with innovative vehicles, so we oppose this last-minute, fundamental change to the program," Newton said in an email. "Tesla shouldn't be able to rig the market for their own purposes."

Tesla did not respond to a request for comment Friday.

Another industry group, Global Automakers, which represents 12 foreign brands, said lawmakers should focus on shoring up incentives — including tax credits and access to restricted highway lanes — to spur consumer demand. Sales of zero-emission vehicles are lagging in part due to low gas prices and improved efficiency of gasoline engines.

"The proposal would cut consumers out of the equation," Damon Shelby Porter, director of state government affairs for Global Automakers, wrote in a letter to lawmakers.

It "will lead to more zero emissions vehicles and more Californians able to purchase them — and that's a smart investment in cleaner air," he wrote.

Brown has traveled the world promoting California's ambitious agenda to fight climate-changing emissions. But he has struggled to advance legislation to continue the programs for another decade and set more stringent goals.

Moderate Democrats in the state Assembly, some backed by the oil industry and hailing from less-affluent inland districts, have been reluctant to bless the most strident emission standards for fear of raising energy prices. The coalition of lawmakers blocked previous Brown-endorsed legislation that aimed to cut petroleum use in half by 2030.

Burke said she believes her electric vehicle legislation is more likely to succeed in the Assembly than the overall climate package because it would encourage the sale of lower-priced electric vehicles that would be available to larger swaths of the middle class.