U.S. schools are using a new approach that critics describe as exploiting a legal loophole. 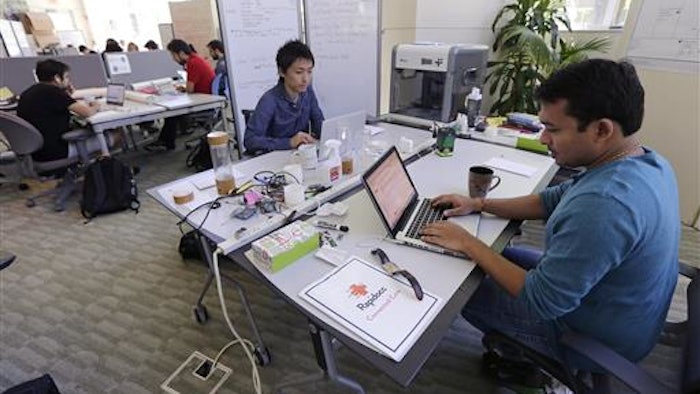 In this Thursday, June 30, 2016 photo, Babson College graduate school alumnus Abhinav Sureka, of Mumbai, India, right, types in his work space at the college in Wellesley, Mass. Some U.S. colleges are starting programs to help their alumni get visas through what critics say is a legal loophole. Foreign grads who want to stay and start a business typically apply for one of the 85,000 H-1B visas that the U.S. gives out each year. But college employees are exempt from that cap, so schools like UMass, Babson and CUNY have launched programs to hire alumni and foreign entrepreneurs and help them grow their businesses here.
AP Photo/Charles Krupa

BOSTON (AP) — He came to America on a student visa, earned a master's degree from Babson College and is now starting a new business, but Abhinav Sureka worries that he'll have to return to India. To stay, he needs an H-1B visa, a temporary work permit typically obtained through a lottery with lower odds of winning than a coin toss.

To help foreign students like Sureka beat those odds and keep their companies here, Babson and at least five other U.S. schools are using a new approach that critics describe as exploiting a legal loophole.

The H-1B visa is the primary work permit for foreign nationals, reserved for employees with at least a bachelor's degree who work in specialty occupations such as math or technology. Workers must be sponsored by an employer to enter an annual lottery for the 85,000 visas awarded by the U.S. This year, 236,000 workers applied.

But employees of universities — or outside workers who provide services to universities — are exempt from the cap and can obtain H-1B visas directly.

Using that exemption, schools are creating "global entrepreneur in residence" programs that let some graduates work part-time on campus, often as mentors, while they develop their businesses. That allows the graduates to say they're providing a service to a U.S. university, which can qualify them for the exemption and a smooth route to a visa.

"This movement came about because of challenges that student visa holders were beginning to face when they had completed a program," said Bill Stock, a Philadelphia attorney and president of the American Immigration Lawyers Association. "There really aren't a lot of other visas that would allow someone to work temporarily."

Congress created the exemption partly to help colleges hire researchers, prompting some critics to say that schools are now exploiting a loophole. In a February letter to the U.S. immigration chief, Republican Sen. Chuck Grassley of Iowa blasted the practice as a "backhanded attempt" to skirt federal rules. He called it a "seemingly unlawful" interpretation of the law.

College officials say they're simply using flexibility in the law's language to address a growing problem. As more international students come to U.S. schools, many want to stay in the country to start their own businesses. But with few legal routes beyond the H-1B lottery, entrepreneurs are routinely forced to go home.

"Every year, we figure Massachusetts says goodbye to over 1,000 graduate students who otherwise want to stay and start a company," said William Brah, who leads a program to help foreign entrepreneurs at the University of Massachusetts' Boston campus. "I mean, it's stupid. You couldn't come up with a more flawed immigration system if you tried."

The UMass program is open to graduates from any U.S. college. Since it started in 2014, it has helped 20 graduates get visas, and their businesses have created 260 jobs, the school says.

Smaller programs have recently formed at the University of Colorado-Boulder, the University of Alaska-Anchorage and Alaska Pacific University, which accept a combined six graduates per year. Babson is now taking applications for up to 10 entrepreneurs.

At the City University of New York, a new program aims to draw 80 business owners from around the world — not just graduates of U.S. colleges.

"We wanted to try to find some way that would make it possible for an entrepreneur to come to the country, without us having to pay them to do it," said Andy Holtz, chief of the program.

Under an H-1B visa, most workers can stay in the U.S. for up to six years. After that, they can go home or pursue other visas, including permanent residence.

Colleges say the new programs are good for their local economies, but they also can help schools with recruiting international students — a group that is charged full tuition, unlike many U.S. students.

At Babson, Sureka and his company's two co-founders — both international students — are considering applying for the college's new program. They've raised $73,000 for their company, Teplo, which plans to produce a high-tech portable tea brewer. When they graduated in May, it started a one-year timer before their student visas expire.

"What if we don't get a visa?" Sureka said. "We can't continue work in the U.S., and the amount of time we have spent on this project is all wasted."