The vote prohibits the transport, handling and storage of coal and petroleum coke at bulk material facilities or terminals in Oakland, part of a California area that is a hotbed of environmentalist activism. 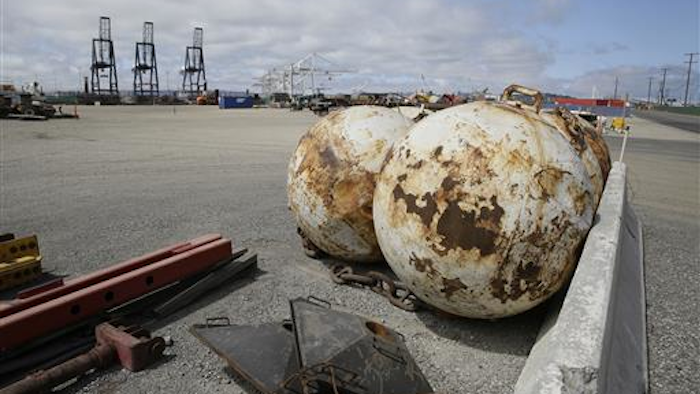 The former Oakland Army Base pier with the Port of Oakland in the background in Oakland, Calif. The promise of good, blue-collar jobs in a depressed area is running headlong into environmental sensitivities as officials in Northern California consider a plan to build a marine terminal that would serve as a gateway for Utah-mined coal heading to Asia. The terminal is in West Oakland, a historically black neighborhood that's among the poorest and most polluted in the region.
AP Photo/Eric Risberg, File

The vote prohibits the transport, handling and storage of coal and petroleum coke at bulk material facilities or terminals in Oakland, part of a California area that is a hotbed of environmentalist activism.

City leaders have wrestled with the issue for at least a year as detractors and supporters of the proposed marine terminal argued over the environmental dangers of bringing millions of tons of coal through the area and the economic benefits of good-paying union jobs.

The terminal is part of a larger makeover of an army base that closed in 1999, eliminating thousands of jobs. City leaders approved the project before the coal proposal was made.

The proposed terminal is in West Oakland, a historically black neighborhood that's among the poorest and most polluted in the region.

Oakland Mayor Libby Schaaf and Councilmember Dan Kalb introduced a proposal Monday to ban the shipping of coal, in advance of a hearing to determine whether coal presents a public safety and health hazard.

"As passionate stewards of the environment who are committed to equity, Oaklanders know that it's a false choice to say we have to pick between jobs and this community's health and safety," Schaaf said in a prepared statement before the vote. "We can, and we will do both."

Jerry Bridges, chief executive of the potential marine terminal operator, said jobs are the biggest issue and any environmental impact will be mitigated by transporting coal in covered rail cars that are unloaded underground.

Bridges and Phil Tagami, the project's master developer, have said that coal is a legal product and that council attempts to ban coal amounts of an illegal taking of their rights.

Before the meeting, more than 150 people on both sides held boisterous rallies full of song and chants.

Even the project's developers conceded early on that the council was likely to vote to ban coal shipments. A lawyer for the Oregon Bulk and Oversized Terminal on Monday sent the council a letter detailing potential legal consequences.

"Politically, no quantity of handling coal or petcoke under whatever extraordinary standard will be tolerated," said David Smith. "While that may accomplish a political outcome, it is only the first steps towards an unfortunate legal outcome."

State Sen. Loni Hancock, D-Berkeley, who has introduced bills to slow or derail the project, said putting the largest coal export depot on the West Coast in the middle of a disenfranchised community that already suffers from environmental pollution is "devastating on so many levels."

California Gov. Jerry Brown last year signed legislation requiring two massive public pension funds to sell off stocks from companies that get more than half their revenues from mining coal. He is a vocal advocate of reducing greenhouse gas emissions.

In 2012, Brown signed a resolution urging the federal government to restrict the export of coal to any country that fails to adopt regulations for greenhouse gas emissions.

But Brown, a former Oakland mayor and friend of Phil Tagami, the project's master developer, has been silent. A spokeswoman for Brown declined to comment.