The deal announced Thursday by the Senate Agriculture Committee would require labeling of genetically modified organisms, or GMOs, in packaged foods nationwide. 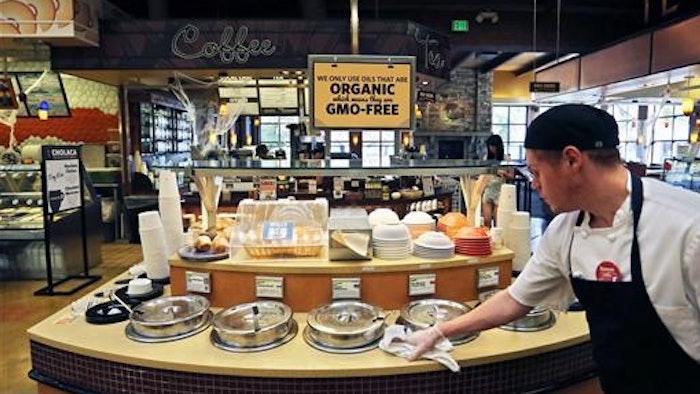 WASHINGTON (AP) — Senators have a bipartisan deal to require labeling of genetically modified ingredients nationally, a week before a labeling law in Vermont goes into effect.

The deal announced Thursday by the top Republican and Democrat on the Senate Agriculture Committee would require labeling of genetically modified organisms, or GMOs, in packaged foods nationwide. But it would be more lenient than Vermont's law, allowing food companies to use a text label, a symbol or electronic label accessed by smartphone. Vermont's law would require items to be labeled "produced with genetic engineering."

The agreement couldn't become law before Vermont's law kicks in July 1, since the House is on vacation until July 5. Legislation passed by the House would make the labeling voluntary, but that measure stalled in the Senate last year.

Since then, Democratic Sen. Debbie Stabenow of Michigan and Republican Sen. Pat Roberts of Kansas have worked to find a compromise, saying a national solution is needed in the face of several separate state laws.

The food industry has lobbied to block Vermont's law, arguing that GMOs are safe and the labels could be costly for agriculture, food companies and consumers.

The industry's main lobbying group, the Grocery Manufacturers Association, said it is backing the senators' deal. The group has opposed mandatory labeling nationwide, but advocated for electronic labels in negotiations.

"This bipartisan agreement ensures consumers across the nation can get clear, consistent information about their food and beverage ingredients and prevents a patchwork of confusing and costly state labeling laws," said Pamela Bailey, president of that group.

One group that has advocated labeling criticized the deal.

"This deal seems to be designed to ensure that big food processing companies and the biotechnology industry continue to profit by misleading consumers," said Wenonah Hauter, director of Food & Water Watch.

The Food and Drug Administration says they are safe, and there is little scientific concern about those GMOs on the market. But advocates for labeling say not enough is known about their risks. Among supporters of labeling are many organic companies that are barred by law from using modified ingredients in their foods.

Those advocates have fought state by state to enact the labeling, with the eventual goal of a national standard. They have frowned on digital labels, saying they discriminate against people who don't have smartphones, computers or the know-how to use them.

One group that has advocated labeling criticized the deal.

"This deal seems to be designed to ensure that big food processing companies and the biotechnology industry continue to profit by misleading consumers," said Wenonah Hauter, director of Food & Water Watch.

The government is banning companies from importing or making plastic bags and Styrofoam takeout containers by the end of this year.
Jun 20th, 2022
Follow Us
Most Recent