China has suffered recurrent consumer safety scandals over recent yeas, and these tracks made from recycled tires and other industrial waste are believed to have caused dizzyness, nosebleeds and respiratory problems among students. 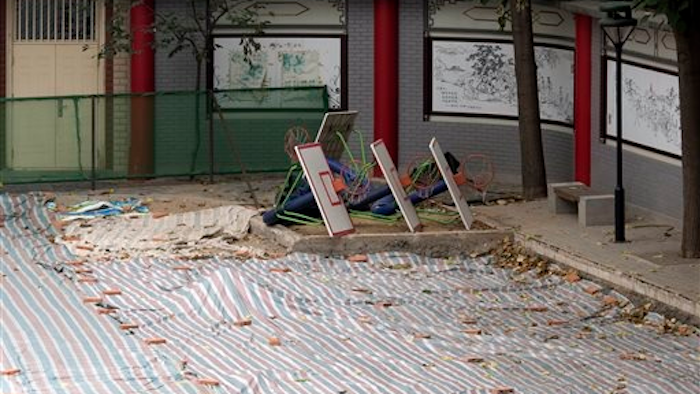 A tarp covers the ground after a running track suspected to be made from toxic material was removed from the Beijing No. 2 Experimental School near in Beijing, China, Thursday, June 23, 2016. Schools across China have been ordered to remove running tracks made from toxic materials that have been blamed for sickening students, in the latest in a long line of product scandals blamed on corruption and weak oversight.
AP Photo/Ng Han Guan

BEIJING (AP) — Schools across China have been ordered to remove running tracks made from toxic materials that have been blamed for sickening students, in the latest in a long line of product scandals blamed on corruption and weak oversight.

A statement on the Education Ministry's website said nationwide inspections by environmental and consumer protection departments have been ordered over the summer school break.

Any track found to be unsafe must be removed, the statement said, while construction of new tracks will be suspended until contractors can be properly vetted to ensure they meet industry standards.

Investigations will also be conducted into officials and others found to have been negligent or corrupt. Those found guilty will be punished severely "with no mercy given," the statement said.

Tracks made from recycled tires and other industrial waste are believed to have caused dizzyness, nosebleeds and respiratory problems among students in Beijing and several outlying provinces.

One Beijing school has already begun tearing up its track after students fell ill during a stretch of particularly hot weather.

School safety has also been an issue, with badly designed buildings leading to crushing incidents. State broadcaster CCTV also recently reported an outbreak of health problems among students at a high school campus in the eastern province of Zhejiang, possibly linked to polluted soil, although local authorities said inspections turned up no environmental problems.

California Sues US Regulator in Bid to Deter 'Ghost Guns'

Closing Date of GM-Nikola Partnership May Be Delayed

Economists believe the economy will expand at an annual rate of 30% in the current quarter, shattering a 50-year-old record.
Sep 30th, 2020

The automaker made incomplete disclosures about an internal audit of its vehicle emissions systems.
Sep 29th, 2020

The measure would establish a panel to review the use of Boeing employees to perform safety analyses.
Sep 29th, 2020

The company hopes to make the leases more attractive to a potential buyer.
Sep 28th, 2020

The EU's General Court ruled that the commission wrongly declared in 2016 that Apple was given illegal state aid.
Sep 25th, 2020