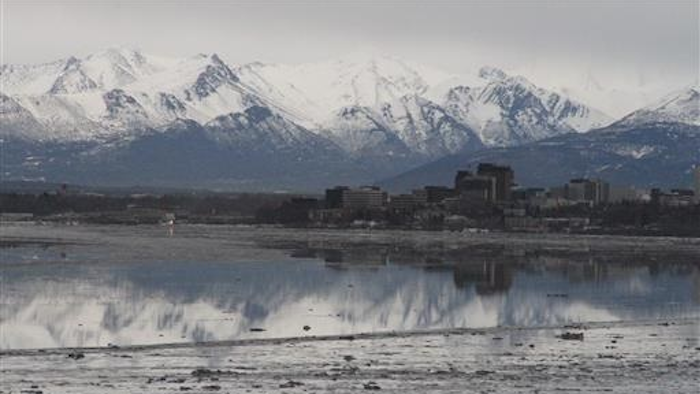 In this Feb. 12, 2016, file photo, the Chugach Mountains and the buildings of downtown Anchorage, Alaska, are reflected in the still waters of Cook Inlet. A national environmental group, the Center for Biological Diversity, has asked the National Marine Fisheries Service to block plans in Cook Inlet by an oil company for hydraulic fracturing, the extraction of oil and gas from rock by injecting high-pressure mixtures of water, sand or gravel and chemicals, because of possible harmful effects on endangered belugas.
AP Photo/Mark Thiessen, File

The group says no hydraulic fracturing by the Fort Worth, Texas-based company should be allowed unless there's additional environmental review.

Hydraulic fracturing is the extraction of oil and gas from rock through injection of high-pressure mixtures of water, sand and chemicals.

Benjamin Johnson, CEO of BlueCrest Energy says he doesn't even consider the company's plans to be offshore drilling.

Johnson says the company will drill about four miles horizontally from a well on shore to reach oil deposits. He says drilling 7,000 feet below the ocean bottom presents no danger to belugas from chemical leaks, noise or earthquakes.