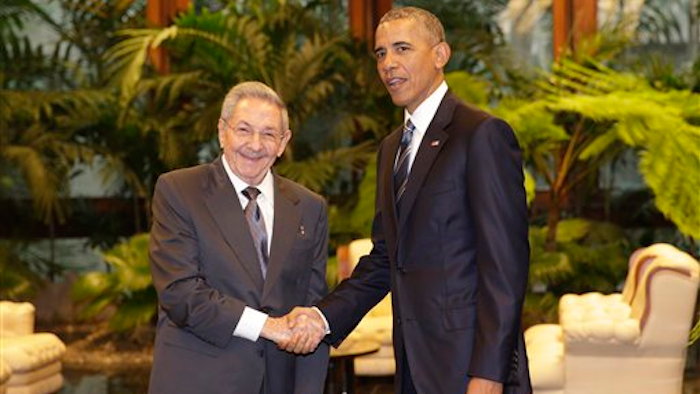 Brushing off decades of distrust, President Barack Obama and Cuban President Raul Castro shook hands Monday in Havana's Palace of the Revolution, opening a meeting aimed at advancing the diplomatic opening that both leaders have pursued.

Obama and Castro stood together as a Cuban military band played the national anthems of Cuba and the United States — stunning sounds in a country where resistance to the U.S. has been part of the government's national mission for decades.

Obama and top U.S. officials warmly greeted their Cuban counterparts before the two presidents sat down for their meeting.

For Obama, there's no better place than Havana to show that engagement can do more than isolation to bring about change on the communist island. Yet for the Cubans, the glaring question is whether their own government is ready to prove the ambitious diplomatic opening is more than just talk.

Obama opened his first full day in Cuba by adjusting a wreath at the memorial to Jose Marti, where a 59-foot statue pays tribute to the Cuban independence hero and writer. He then entered the Palace of the Revolution and where he was met by Castro before the two inspected a military honor guard.

Obama also planned an event Monday with U.S. and Cuban entrepreneurs aimed at championing Cuba's fledgling private sector. He was to be feted in the evening at a state dinner, an honor illustrating just how far the U.S. and Cuba have come despite their deep ideological differences.