"Seems like the Flint lead issue is really getting concerning," wrote McCarthy, who is scheduled to testify today.

U.S. Environmental Protection Agency chief Gina McCarthy ordered some top staff members in late September to focus on lead contamination in Flint, Michigan — after university researchers and local doctors warned that city residents were in danger — and said the matter "could get very big very quickly," according to emails released Wednesday.

"Seems like the Flint lead issue is really getting concerning," McCarthy wrote Sept. 26 in a message to other EPA officials, among 1,200 pages of emails The Associated Press obtained under a Freedom of Information Act request.

McCarthy was responding to an email the previous day from Susan Hedman, then the head of the EPA's regional office in Chicago, who resigned in January amid complaints from the public and elected officials that the agency hadn't reacted urgently enough after learning Flint's water was tainted. By then a Virginia Tech professor and local doctor had issued warnings about elevated lead levels, although an EPA staffer had raised alarms about the lead problem five months earlier.

Flint had switched its water source from the Detroit system to the Flint River as a temporary cost-saving measure in April 2014 while under state management, with plans eventually to use lake water again. The river water wasn't treated with anti-corrosion chemicals, an omission that let lead leach from old pipes into the drinking water.

McCarthy is scheduled to testify Thursday before the U.S. House Committee on Oversight and Government Reform, whose Republican majority has been sharply critical of the agency's actions. The emails released Wednesday include messages about Flint that McCarthy sent or received through Dec. 31, though others were withheld "because of attorney-client privilege," said Denise Walker of the EPA's Office of General Counsel.

An EPA scientist began raising concerns about the water's lead content in April 2015, pressing the Michigan Department of Environmental Quality for information about whether the city was using anti-corrosive chemicals. In a June memo, the scientist, Miguel Del Toral, urged EPA colleagues to review whether Flint had violated federal corrosion control requirements.

Hedman wrote to McCarthy on Sept. 25: "Controversy surrounding lead levels in drinking water in Flint increased again this week, when a group of local physicians released a report suggesting that blood lead levels in a sample of Flint children have doubled since the city started using water from the Flint River." She described actions the EPA was taking on the regional level, including meeting with city and state officials and discussing federal financial assistance with U.S. Rep. Dan Kildee, a Michigan Democrat whose district includes Flint.

"I would suggest that a meeting be scheduled ... to get everyone fully briefed and the history, where we are now and what needs to be done by whom," McCarthy responded the next day in a message to several EPA officials. "This situation has the opportunity to get very big very quickly."

Also on Sept. 26, McCarthy received an email from Peter Grevatt, director of the EPA's Office of Ground Water and Drinking Water. It included a message sent six days earlier by Marc Edwards, the Virginia Tech environmental engineer. He and colleagues had tested Flint drinking water and warned that its lead levels were dangerously high and local officials were not properly conducting sampling, adding, "This is an unprecedented situation and EPA needs to take this seriously. Now."

McCarthy wrote to aides that the Hedman and Grevatt emails "raise my level of concern" and suggested that they "look at options to intervene" if necessary. But hours later, after an aide talked with colleagues and briefed McCarthy, both agreed that state officials needed to "step up."

Over the next two months, the EPA established a task force to help state and local agencies with corrosion control and home water sampling, while beginning an audit of the DEQ's oversight of public water supplies.

Yet it wasn't until Jan. 21 that the federal agency issued an order demanding action, saying the state and city were moving too slowly.

Despite criticism of the EPA, a task force appointed by Michigan's Republican Gov. Rick Snyder and the state's auditing office pinned most of the blame on the state DEQ, which had not ordered Flint officials to apply anti-corrosion treatments. Snyder has apologized repeatedly for the state's response.

"Wow," was the one-word message sent that day by McCarthy to Hedman. "Wow indeed," Hedman responded, adding, "I didn't get a heads up — so I haven't had a chance to speak with him."

Hedman, whose own departure was announced the next month, testified before the House committee Tuesday and drew stinging criticism from lawmakers for not doing more. 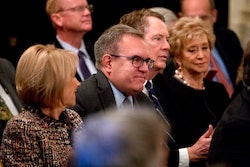