Apple CEO: No Tolerance for Terrorists, but U.S. Should Withdraw iPhone Hack Demand

If the company's engineers did as ordered, the company "would be relentlessly attacked by hackers and cybercriminals," says CEO Tim Cook. 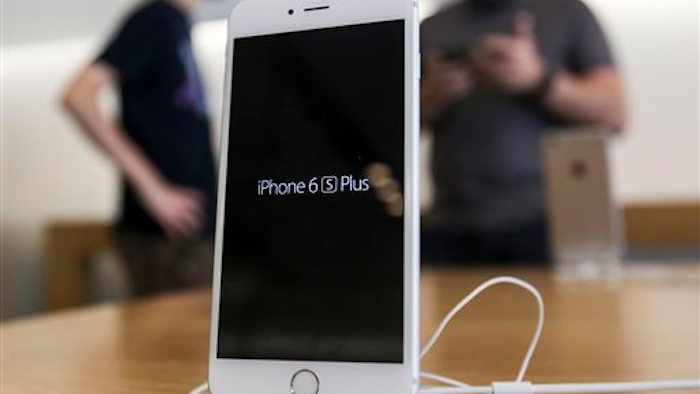 An Apple iPhone 6s Plus smartphone is displayed Friday, Sept. 25, 2015 at the Apple store at The Grove in Los Angeles. On Wednesday, Feb. 17, 2016, a federal judge ordered Apple Inc. to help the FBI hack into an encrypted iPhone used by Syed Farook, who along with his wife, Tashfeen Malik, killed 14 people in December in the worst terror attack on U.S. soil since Sept. 11, 2001. Apple has helped the government before in this and previous cases, but this time Apple CEO Tim Cook said no and Apple is appealing the order.
AP Photo/Ringo H.W. Chiu

Apple Inc. CEO Tim Cook acknowledged to employees Monday that "it does not feel right" to refuse to help the FBI hack a locked iPhone of a gunman in last year's San Bernardino mass shootings. But he said that to comply would threaten data security for millions and "everyone's civil liberties."

"We have no tolerance or sympathy for terrorists," Cook wrote in an email addressed to the Apple team. But he said the company believes abiding by a judge's order would set a dangerous precedent that essentially would create a backdoor to the encrypted iPhone.

Cook's email came just hours after FBI director James Comey said in an online post that Apple owes it to the victims to cooperate and that the dispute wasn't about creating legal precedent.

The FBI "can't look the survivors in the eye, or ourselves in the mirror, if we don't follow this lead," Comey said.

At the government's request, a federal magistrate judge has ordered Apple to help the FBI hack into the password-protected phone used by Syed Farook, who along with his wife killed 14 people in the Dec. 2 rampage.

The emerging legal fight has sparked a debate on government power, privacy, digital rights, public safety and security. Apple has until Friday to formally protest the ruling in court.

Apple, in its message to employees, appeared to be sensitive to criticism that the company is simply trying to protect its proprietary business.

"It does not feel right to be on the opposite side of the government in a case centering on the freedoms and liberties that government is meant to protect," Cook wrote. But he added, "this case is about much more than a single phone or a single investigation, so when we received the government's order we knew we had to speak out."

The email acknowledges that it is technically possible for Apple to do what the judge ordered, but that it's "something we believe is too dangerous to do."

Cook said the government should withdraw its demand to the judge and form a group to discuss the issues brought up by this case. He said Apple would participate in such an undertaking.

Comey, in a statement posted on the Lawfare blog, sought to defend the FBI demand.

"We simply want the chance, with a search warrant, to try to guess the terrorist's passcode without the phone essentially self-destructing and without it taking a decade to guess correctly. That's it," Comey wrote. "We don't want to break anyone's encryption or set a master key loose on the land."

Apple has pointed to the difficulty of keeping such a "master key" safe once it has been created. The government has said that Apple could keep the specialized technology it would create to help officials hack the phone, bypassing a security time delay and feature that erases all data after 10 consecutive, unsuccessful attempts to guess the unlocking passcode.

If the company's engineers were to do as ordered, Apple would do its best to protect the technology, but Cook said the company "would be relentlessly attacked by hackers and cybercriminals."

"The only way to guarantee such a powerful tool isn't abused and doesn't fall into the wrong hands is to never create it," Apple said.