Lithium-ion batteries are used to power everything from cellphones and laptops to hybrid and all-electric cars, and about 5.4 billion lithium-ion cells were manufactured worldwide in 2014. 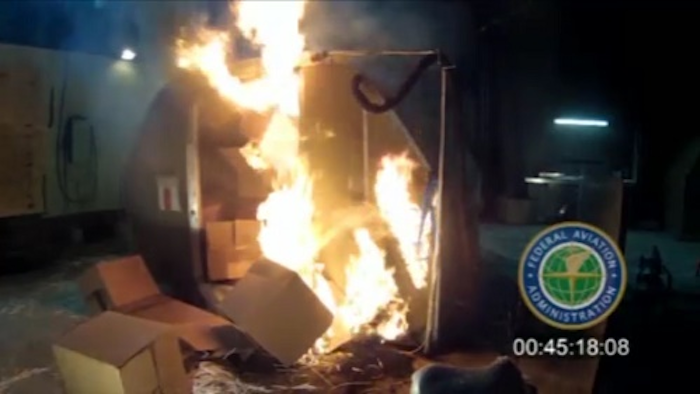 This file frame grab from video, provided by the Federal Aviation Administration (FAA) shows a test at the FAAs technical center in Atlantic City, N.J. last April, where a cargo container was packed with 5,000 rechargeable lithium-ion batteries. Officials say Jan. 27, 2016, a U.N. aviation panel is recommending a ban on shipping rechargeable batteries as cargo on passenger airliners because the batteries can create fires capable of destroying planes. (AP Photo/FAA, File)
AP

WASHINGTON (AP) — A U.N. panel has recommended that cargo shipments of rechargeable lithium batteries be banned from passenger airliners because the batteries can create fires capable of destroying planes, said aviation officials familiar with the decision.

The International Civilian Aviation Organization's air navigation commission, the agency's highest technical body, also proposed in a closed-door meeting Wednesday that the ban be lifted if new packaging can be developed that provides an acceptable level of safety.

Final approval from the ICAO top-level council is still needed. The council is scheduled to take up the matter in late February.

The officials spoke on condition that they not be named because they weren't authorized to speak publicly.

Lithium-ion batteries are used to power everything from cellphones and laptops to hybrid and all-electric cars. About 5.4 billion lithium-ion cells were manufactured worldwide in 2014. A battery is made up of two or more cells. A majority are transported on cargo ships, but about 30 percent are shipped by air.

Federal Aviation Administration tests show a single damaged or defective battery can experience uncontrolled temperature increases that can spread throughout a shipment. It's not unusual for tens of thousands batteries to be shipped in a single cargo container.

In FAA tests, the overheating batteries have released explosive gases that, when ignited, have blown the doors off cargo containers and sent boxes of batteries hurtling through the air before becoming engulfed in flames.

Engineers from FAA's technical center told a public meeting last year that the explosions are forceful enough to knock the interior panels off cargo compartment walls. That would allow halon, the fire suppression agent used in airliners, to escape, leaving nothing to prevent fires from spreading unchecked.

Safety experts believe at least three cargo planes have been destroyed by lithium battery fires since 2006. Four pilots died in those accidents.

The proposed ban wouldn't apply to cargo planes despite efforts by the International Federation of Air Line Pilot Associations to include cargo operations.

Last March, an organization that represents aircraft manufacturers — including the world's two largest, Boeing and Airbus — told ICAO that airliners aren't designed to withstand lithium battery fires and that continuing to accept battery shipments is "an unacceptable risk."

Six months later the U.S. decided to back a ban. But the battery industry, shippers and the International Air Transport Association, a global airline trade group, have strongly resisted. They say the risk is primarily due to shady manufacturers, mostly in China, that evade packaging and handling regulations.

The Transportation Department is barred from imposing its own ban under a 2012 law Congress passed at the behest of industry.

In late October, an ICAO panel on the transport of dangerous goods voted 11-7 against a ban. The U.S., Russia, Brazil, China and Spain, as well as organizations representing airline pilots and aircraft manufacturers, voted for it. The Netherlands, Canada, France, Germany, Australia, Italy, United Arab Emirates, South Korea, Japan and the United Kingdom, as well as the airline trade group, voted against it.

Aviation officials interviewed by The Associated Press said they couldn't predict whether the council, which has 36 members, will ultimately agree to a ban.

The Montreal-based ICAO sent an alert to airlines this summer urging that they conduct risk assessments on how to safely handle the shipments. At least 20 airlines that fly internationally have voluntarily decided to no longer accept battery shipments.