Scientist Can Inject Night Vision Straight into Your Eye

But will troops be on board with the whole needle-in-the-eyeball thing?

Back in April, U.S. Army Lieutenant General James Richardson told the Senate Armed Services Committee that the new ENVG-B – the army’s enhanced night vision goggle-binocular – was “better than anything (he’s) experienced” in his whole career.

But according to Task & Purpose, the night vision game is hot right now and Microsoft is working on a project that could bump out this new tech as soon as 2022. It’s being referred to as being almost like “a real-life Call of Duty” and incorporates a version of the developer’s HoloLens augmented realty technology, along with night and thermal vision capabilities.

But for some scientists, the night vision technology race that’s already underway isn’t good enough, as they want to get rid of the glasses part entirely. And just how do you do that? Well, for most of us, it’s the stuff of nightmares.

Scientists like Dr. Gang Han feel there is another way for soldiers in combat missions to utilize night vision, and without any heavy equipment because they’d just be using their own eyes – with some modifications, of course.

Han’s team at the University of Massachusetts Medical School propose injecting the user’s eyeball with nanoparticles that can enhance their ability to see more than just standard “visible light.” Their experiments started with mice, whose eyes were injected with upconversion nanoparticles – or UCNPs. According to a press release published by the American Chemical Society, who plans to host a presentation on the technology this Fall, these nanoparticles contain rare-earth elements which can “convert low-energy photons from NIR light into higher-energy green light that mammalian eyes can see.”

The UCNPs lasted about ten weeks in the mice’s eyes and didn’t cause any noticeable side effects. And while there are many obvious upsides to having superpowers, will troops be on board with the whole needle in the eyeball thing? The glasses, we should note, only weigh about two pounds. 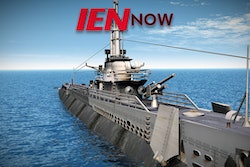