A new app in China wants to use social stigmas to shame people in debt into paying what they owe.

In America, the spotlight is shining hard on the privacy concerns that seem to come wrapped around our addiction to technology. And while we’re struggling to reign in the public use of our data, in China, high tech developments are being used more and more often to engineer social behavior – to the point where a lack of privacy is kind of the point.

Last year we reported on a new technology that one Chinese city had put in place in an effort to shame jaywalkers. When pedestrians defy the warnings of audio prompts and cross outside the lines, they can be sprayed with water jets. Following this assault, their photos are then posted across the street for all to see.

Along those same lines, there’s a new app in China that wants to use social stigmas to shame people in debt into paying what they owe.

According to Business Insider, there’s now an app available in Hebei, a northern China province, that allows the user to view a map of their surrounding radius that points out all the “deadbeat debtors” within 500 meters.

Accessible via WeChat, China’s most popular online messaging platform, the app will reveal the debtor’s full name and location and asks users to “keep an eye on the debtor” – debtor being defined as someone who has defaulted on court-mandated repayments. China Daily says users can then “whistle blow” on those who appear to be capable of paying their debts, though it doesn’t elaborate on how exactly that should be determined.

The Deadbeat Map is said to be part of a larger initiative in China – termed the Social Credit System – which is the country’s attempt to isolate who it considers to be dishonest people from ones who are trustworthy and obedient to the society and its rules.

The scary underpinnings of SCS have led, according to China’s National Development and Reform Commission, to over 7 million people being deemed as "untrustworthy.” Citizens are receiving personal scores, and the debt detection is just one of the ways they could find themselves downgraded, resulting in punishments like bans from staying in 5-star hotels, taking a vacation, even sending their kids to private school. 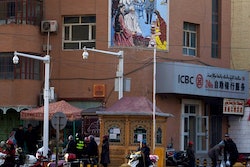