But this isn’t the only deterrent.

For decades, researchers have used advancements in technology to target a huge range of societal ills. This ranges from car crash prevention to protective tech for law enforcement in order to reduce risk.

For the world’s most populous country, urban congestion and high traffic volumes mean there is more risk than you’d think in simply being a pedestrian.

Last year, authorities in China tabulated that there were 14,000 incidents between cars and pedestrians over the previous three-year period, and about one-tenth of those were blamed on jaywalking.

The city of Daye in China’s Hubei province has embarked on an experiment designed to keep jaywalkers in check.

Frankly, it’s pretty unorthodox and would NEVER fly in the United States: if pedestrians defy traffic signals at intersections, they can be sprayed with jets of water.

One of the city’s most highly trafficked intersections is now equipped with five yellow pylons equipped with motion sensors. They place nice at first – offering pedestrians verbal cues on when to cross and warnings that, if they do at the wrong time, they will be sprayed with water.

But this isn’t the only deterrent. If it’s not enough for you to be sprayed with a cold jet of water when you’re on your way to work, then facial recognition technology installed within the posts can be used to identify you.

The images are uploaded instantly to a screen across the street and, if that wasn’t enough public shaming, to a police database. Authorities are said to be mulling over the prospect of making the names and identities of jaywalkers public once they’ve been identified.

The system cost about $200,000 to implement, so it’s unlikely it will see widespread use.

Apparently, it’s just one of a few ideas being tested in various Chinese provinces. Another city, Shenzhen, has been using these same shaming methods, but also sends fines to offenders via text message.

Fines? Now that would never work. 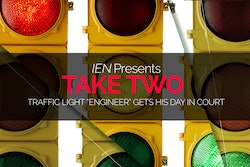