Elon Musk Says Mars Trips Are a Year Away

Could this lofty timeline be a reality?

It’s been widely reported that Tesla is nowhere near its target for completing the ambitious goal of producing 2,500 Model 3s per week by the end of March. In fact, a recent 4-day shutdown resulted in even more mystery, as Elon Musk’s famously lofty projections looked even less likely to come to fruition than they did before.

But experts say that, despite these slowdowns, Tesla might not be impacted. People are excited by Elon Musk because he has a dramatic vision, he puts money into technology and he continues to innovate – whether that be with cars, tunnels or, heck, even flame throwers.

This week Musk has made another dramatic proclamation. One that seems so unlikely that it’s hard to believe – the billionaire entrepreneur says that his SpaceX company will be running short flights to Mars by… wait for it… next year. During a Q&A at the SXSW festival, Musk told a crowd that SpaceX was working on the first interplanetary ship and that he figured they’d be able to do “short up and down flights” by the first half of next year.

The Big Falcon Rocket was initially intended to be hauling cargo to Mars by 2022, but if that occurs so much sooner, it might be a much faster timeline for sending humans. CNN says that Musk’s ultimate goal with SpaceX is to colonize Mars and Musk himself admitted the potential, saying he envisioned it would run as a direct democracy, where people would vote on all issues, rather than electing government officials. You know… hypothetically speaking. Oh, and he also thinks Mars should have pizza joints and “great bars.” 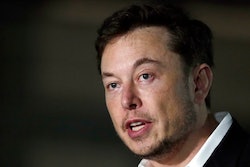