He plans to launch himself into space to prove the earth is flat.

If you’ve ever wondered if the whole planet-as-a-sphere thing was a total scam, you’re not alone and – lucky for you – Mad Mike Hughes has set out to prove that the earth is actually flat.

It’s been a week of ups and downs for Hughes, a limo driver who also happens to be a self-taught rocket scientist. He’s been a DIY enthusiast for years, at one point building his own rocket – emblazoned with the words “Research Flat Earth” – with 20,000 crowd-funded dollars.

Well, Hughes had scheduled a launch – his third attempt – for this past Saturday, but aborted the mission at the last minute due to a problem with a valve. Instead of launching himself 1,800 feet at 500 miles per hour, he was forced to cancel and left the door open as to when he’d attempt again.

If you can say one thing for Mad Mike, it’s that he seems to have the brass to actually do this. In 2014, he launched himself nearly 1,400 feet in full view of an astonished crowd. But this latest launch has been mired in delays and now Mad Mike seems to be hedging a bit, saying he’s not sure how much more he can “man up.” But he’s going to have to if he wants this to work because the latest launch was intended to be a publicity stunt, designed to raise money for the real deal: estimates suggest that an appropriately equipped craft will require about $2 million.

No word yet on when we’ll see Mad Mike take to the skies for his next attempt. He told a crowd of observers on Saturday that he had some prior commitments this week – namely court appearances relating to some lawsuits against the California state government.

This is interesting, because I can’t – for the life of me – think of another entrepreneur who promised to build something huge and unprecedented, and then slowly descended into madness.

Just teasing, Elon. You can drop the flame thrower though. 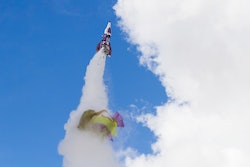 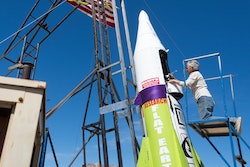