New Destroyers Have Everything But Bullets

The next-gen Zumwalt fleet has hit munition cost issues that could shine a new light on railgun advancements.

When the USS Zumwalt was commissioned in late 2016, the stealthy guided missile destroyer was lauded as the future of Naval combat operations. Costing roughly $4B each, it will be joined by the Michael Monsoor this March and the Lyndon B. Johnson in 2020.

This trio features the latest in aerodynamic design, efficient power generation and navigational stealth. About the only thing it’s missing – bullets.

The Zumwalt is still being put through its paces and is roughly two years from being combat-ready. In the meantime, its main issue is that plans to outfit the ship with long-range land attack projectiles that could be fired from the 155 mm Advanced Gun Systems fell through after the $800,000 per round price tag was deemed a bit too high.

So, while the Zumwalt is designed to carry a host of land and anti-submarine missiles, it’s still missing that traditional artillery piece that provides what the Navy describes as a “long-range surface strike platform.”

The Navy is reportedly keeping an eye on emerging technologies, but they need something that will support the Advanced Gun System platform already onboard. This means a munition that compliments the AGS design of putting a lot of rounds down range with great precision.

What’s interesting is that while the Navy built a better gun than bullet with the AGS, they basically did the exact opposite with the railgun.

Going back to a report from early December delivered by yours truly, the energy demands, rate of fire and ability to properly mount the electric railgun on a ship has stalled its progress.

However, the munitions being developed were seemingly compatible with other Navy guns and continue to receive strong funding levels.

Although these rounds weren’t designed for the level of precision preferred by the AGS, they do meet the high rate of fire demands and could provide a more immediate and affordable solution. 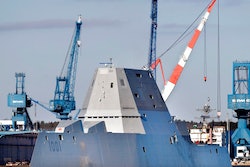 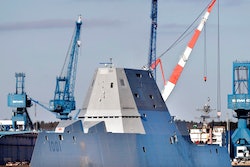