It may be the cheapest way to fake an autonomous car.

Residents of Washington DC and Northern Virginia may have encountered an unusual scenario last month, when an experiment relating to driverless car technology played out on the streets around them.

The experiment, initiated by Ford Motor Company and Virginia Tech's Transportation Institute, intended to capture the reactions of pedestrians, cars and bicyclists to driverless cars. A Ford Transit Connect was outfitted with 360-degree cameras, a lightbar that indicated the intentions of the driverless car, and something else – a driver.

That’s right – with autonomous vehicle technology still in the testing stage, Ford used a real human driver for this effort, but outfitted him in a suit that looked just like a vehicle seat. Without looking closely through the window downwards to see his hands on the bottom of the steering wheel, passersby would have no way of knowing that there was a person at the helm.

The results were interesting, though not particularly surprising. Driverless technology is still a novelty, so many responded with looks of shock, with some even taking pictures. What the study did yield was a need for these vehicles to provide transparent indications of what their intentions would be. The test car’s lightbar used signals to indicate whether it planned to either yield or accelerate and one that indicated it was driving autonomously. Researchers feel a language like this could replace the unspoken rules of the road that have long existed between drivers and pedestrians that effectively keep people safe.

Is Ford Killing the Continental? 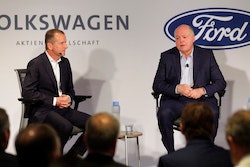