The shield solves law enforcement struggles with products that are difficult to transport and too heavy to deploy.

First, you are extremely confident in the material’s ability to guard against small arms fire and shrapnel, because, secondly, it’s pretty heavy.

To help preserve that confidence, but lighten the load, engineers at Brigham Young University have developed a collapsible bulletproof shield that’s been able to stop ammunition from 9 mm, .357 and .44 caliber hand guns – but weighs about half as much as products currently available.

And while you might expect their inspiration to come from new material technologies or advanced ballistics studies – it’s origins emanate from the 1,000-year old art form of Origami.

The team worked with federal special agents, SWAT teams and police officers in learning how current products that resemble flat, cumbersome, 100-pound medieval shields are often too difficult to transport and too heavy to deploy.

Their response is a 55-pound unit that folds up like an umbrella and can be deployed in about 5 seconds.

The new barriers are constructed with 12 layers of bulletproof Kevlar and utilize a Yoshimura Origami creasing pattern that allows the shield to not only expand around an officer for greater coverage, but it can be folded into a more manageable size for storage and redeployment.

And it’s sturdy. The BYU team says the new barrier took direct hits from .44 Magnum rounds and didn’t flinch. This matches with the team’s goals of maintaining rigidity without compromising the flexible qualities of the Kevlar.

In addition to protecting police officers, researchers believe the barrier could also be used to protect hostages or EMTs. Although the ballistic barrier is currently just a prototype, the response from law enforcement has been positive and the school is seeking investors to help with manufacturing. 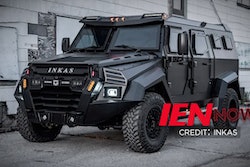 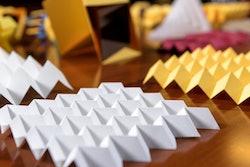