Researchers at the University of Minnesota have made a major breakthrough that allows people to control a robotic arm using only their minds.

Eight people recently tested the cap, and most were able to get the robotic arm to pick up objects in fixed locations, and many could take those objects from the table and move them onto the shelf.

According to the researchers, this is the first time in the world that people have operated a robotic arm to reach and grasp objects in a complex 3D environment using only their thoughts. That means, they didn’t have an implant.

The research could help millions of people who are paralyzed or have neurodegenerative diseases.

Every year, thousands of men with prostate cancer undergo biopsies to help their doctors understand the progression and nature of their disease. It gives them vital, even life-saving information. Still, cancer researcher John Lewis, from the University of Alberta, knows that it can be a difficult test to ask of anyone.

Lewis described it vividly, when he said that “the best way to get information is through a biopsy, which involves pushing 12 needles through an organ the size of a walnut.”

Patients with low grade prostate cancer can decide not to get treatment and instead monitor the disease, but monitoring still involves a biopsy every year or so. Year after year, 12 new needles, same walnut. So, a lot of patients just decide to go through with the surgery.

In a promising new study published in the journal Cancer Research, University of Alberta researchers describe how they used focused ultrasound and particles called nanodroplets for the enhanced detection of cancer biomarkers in the blood. The technique provides a large amount of genetic material to analyze the aggressiveness of the tumor by drawing just a small sample of blood.

The researchers say the technique is as accurate as using needles in a biopsy, and the genetic information could even be used to develop personalized medicine.

The plan is to quickly move towards clinical trials, and from there, real world applications.

A Hairy Robot is a Sensitive Robot

Researchers at the Harbin Institute of Technology in China have created a multi-functional tactile sensor that uses ferromagnetic microwires to mimic the tiny hairs on human skin. Until now, it's been the biggest missing piece in the electronic-skin puzzle. And when I say big, consider that 95-percent of the human body is covered with these tiny hairs.

In a new report in Applied Materials & Interfaces, the researchers show how they created an array of artificial hairs with glass-coated, cobalt-based microwires and embedded them into a fake skin made of silicon-rubber.

The "hairy skin" is much more sensitive, and can detect anything from a light breeze to a pesky fly. Where this development stands to make the biggest impact is in future robots and prosthetics that could feel when something was slipping out if its hands.

So now that we can actually control robotic limbs with our minds, we can give them a few plugs and have a better sense of where we are, and what we’re doing. 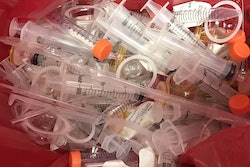 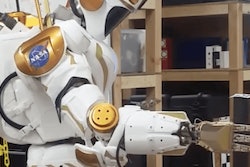 Making Robots That Work With Their Hands