Weather is one of the biggest obstacles to autonomous cars because snow can stop cameras and other sensors. 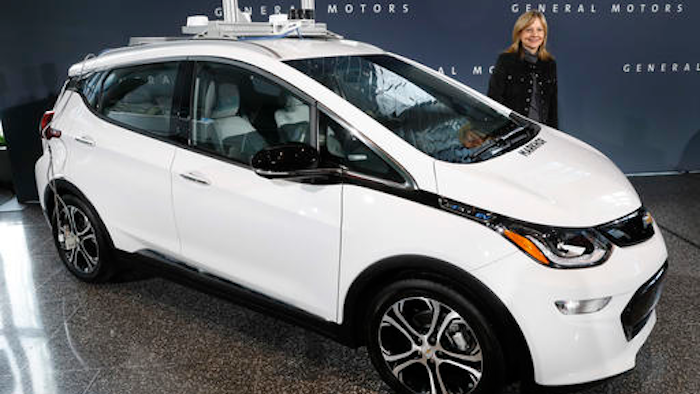 The announcement comes just one week after Gov. Rick Snyder signed legislation that allows the cars to be tested on public roads without a driver or a steering wheel. But the automaker says that for now, it will have human backup drivers for its fleet of autonomous Chevrolet Bolt electric cars.

Testing started Thursday on roads near the tech center in Warren, Michigan. The Bolts will soon move to the entire Detroit metro area, which will serve as the company's main testing center for snowy and cold weather.

Weather is one of the biggest obstacles to autonomous cars because snow can stop cameras and other sensors from spotting critical things such as lane lines and traffic signals. GM's other public-road testing sites are in warm climates: San Francisco and Scottsdale, Arizona. Currently it's running about 40 autonomous Bolts in tests.

CEO Mary Barra also announced Thursday that GM will build an unspecified number of fully autonomous Bolts on the assembly line where regular Bolts are made, in order to gain expertise in building autonomous vehicles.

The Bolt, which went on sale in California and Oregon this week, can go 238 miles on a single charge and costs about $30,000 when a $7,500 federal tax credit is factored in. Autonomous Bolts, which have distinctive spinning laser towers on their roofs, will come off the assembly line in Orion Township north of Detroit starting next year.

GM had been testing autonomous Bolts on the sprawling technical center grounds for the past few weeks, but wanted to move to public roads soon after the law became effective to take advantage of weather.

"There's so much complexity on public roads," said Doug Parks, the company's vice president of autonomous vehicle engineering. "We're trying to prepare for every different kind of failure mode."

Executives wouldn't say when GM would start testing without a human driver, but predicted it would be within a couple of years. GM also wants to start running a fleet of autonomous taxis that could be summoned by passengers and is allowed under the new Michigan law.