Mark Zuckerberg and Priscilla Chan are committing $3 billion over the next 10 years to accelerate basic scientific research. 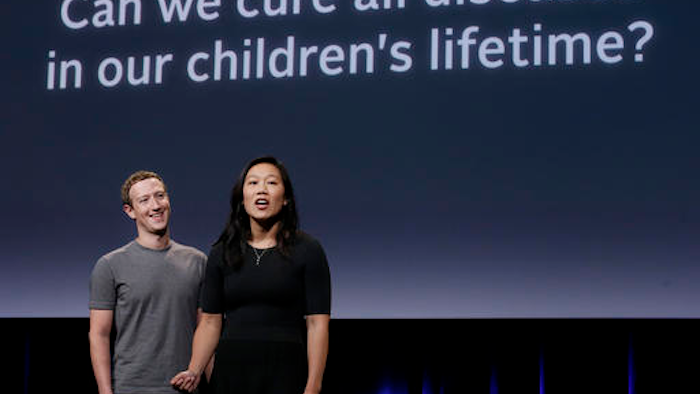 In this Tuesday, Sept. 20, 2016, photo, Facebook CEO Mark Zuckerberg and his wife, Priscilla Chan, prepare for a speech in San Francisco. Zuckerberg and Chan have a new lofty goal: to cure, manage or eradicate all disease by the end of this century. To this end, the Chan Zuckerberg Initiative, the couple's philanthropic organization, is committing significant financial resources over the next decade to help accelerate basic science research.
AP Photo/Jeff Chiu

SAN FRANCISCO (AP) — Facebook CEO Mark Zuckerberg has a goal that's even more ambitious than connecting the entire world to the internet: He and his wife want to help eradicate all disease by the end of this century.

Zuckerberg and Priscilla Chan are committing $3 billion over the next 10 years to accelerate basic scientific research. That includes creating research tools — from software to hardware to yet-undiscovered techniques — they hope will ultimately lead to scientific breakthroughs, the way the microscope and DNA sequencing have in generations past.

The goal is to "cure, prevent or manage all disease" in the next 80 or so years, a timeframe the 30-something couple are unlikely to live to see. They acknowledge that this might sound crazy, but point to how far medicine and science have come in the last century — with vaccines, statins for heart disease, chemotherapy, and so on — following millennia with little progress.

At current rates of progress, Zuckerberg reckons, it will be possible to solve most of these problems "by the end of this century." Zuckerberg and Chan have spent the past two years speaking to scientists and other experts to plan the endeavor. In an interview, Zuckerberg emphasized "that this isn't something where we just read a book and decided we're going to do."

Through their philanthropic organization, the Chan Zuckerberg Initiative, the commitment includes $600 million to fund a new research center in San Francisco where scientific and medical researchers will work alongside engineers on projects spanning years or even decades. The goal is not to focus narrowly on specific ailments, such as bone cancer or Parkinson's disease, but rather to do basic research. One example: a cell atlas that maps out all the different types of cells in the body, which could help researchers create various types of drugs.

Chan's work as a pediatrician seems to be a big driver in the couple's decision to take up this latest cause.

"I've been with families where we've hit the limit of what's possible through medicine and science," Chan said. "I've had to tell families devastating diagnoses of leukemia, or that we just weren't able to resuscitate their child."

The couple spoke with The Associated Press in their home in Palo Alto, California, where their infant daughter, Max, had just woken from a nap. Their dog, Beast, came by to sit briefly during the 25-minute interview.

Zuckerberg and Chan hope that their effort will inspire other far-reaching efforts and collaboration in science, medicine and engineering, so that basic research is no longer relegated to the margins.

"We spend 50 times more on health care treating people who are sick than we spend on science research (to cure) diseases so that people don't get sick in the first place," Zuckerberg said.

Eric Lander, a professor of biology at the Massachusetts Institute of Technology, said he's had some 20 conversations with Zuckerberg and Chan over the past year about the initiative and called it "the right kind of goal for thinking about that kind of timeframe." He is not involved with the project itself, but expressed confidence in it.

"Mark has brought new models to industry with Facebook," he said.

Zuckerberg said it has been difficult with today's scientific funding to build scientific teams of the scale "you would find at a world-class technology company."

Nobel laureate David Baltimore wrote in the journal Science that private efforts such as Zuckerberg and Chan's could help supplement government funding and "initiate research thrusts into unproven directions, which generally do not draw government funding."

Their new center, Biohub, will run as an independent research center at the University of California, San Francisco in collaboration with UC Berkeley and Stanford University.

The Chan Zuckerberg science initiative will be headed by Cori Bargmann, a neuroscientist who is best known in scientific circles for her research on the behavior of a tiny worm called C. elegans. Bargmann said the idea of bringing engineers and scientists together presents a "unique opportunity to take science in a new direction."

Zuckerberg and Chan, who have committed to donating 99 percent of their wealth , stressed that they believe that their goal can be accomplished, if not in their lifetime, then in their child's lifetime. It was Max's birth last November that inspired the billionaire couple to give away nearly all their money to help solve the world's problems.

At the time, this was valued at more than $45 billion worth of Facebook stock, which the couple transferred to the Chan Zuckerberg Initiative. The couple's philanthropy plan won't affect Zuckerberg's status as controlling shareholder of Facebook.

Zuckerberg and Chan often draw comparisons to Bill and Melinda Gates, whose philanthropic work also focuses on health and education. In an emailed statement, the Gates said investing "in basic science research is at the root of the world's most important innovations and achievements." Zuckerberg and Chan, the Gates added, "are making an incredible commitment to research and development that will lead to the breakthroughs to cure disease and lift millions out of poverty."

Zuckerberg: Build a World of 'Purpose'