This greatly expands the number of habitable worlds likely to exist across the galaxy. 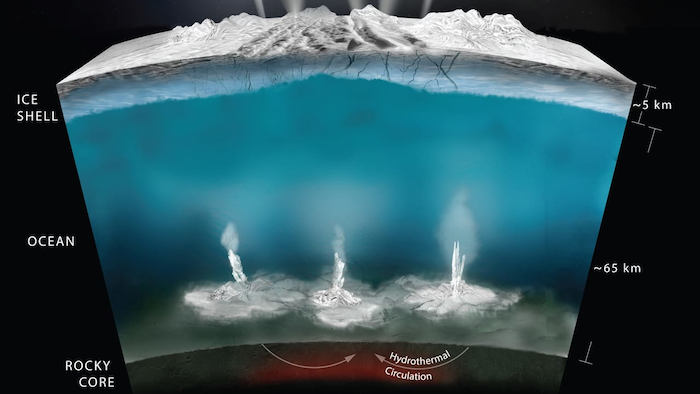 Interior water ocean worlds like Saturn’s moon, Enceladus, are prevalent throughout the universe. New research from Southwest Research Institute suggests that layers of rock and ice may shield life within such oceans, protecting it from impacts, radiation and other hazards and concealing it from detection. Layers of rock and ice may therefore shield and protect life residing in them, and also sequester them from threats and detection.
NASA/JPL-Caltech/Southwest Research Institute

One of the most profound discoveries in planetary science over the past 25 years is that worlds with oceans beneath layers of rock and ice are common in our solar system. Such worlds include the icy satellites of the giant planets, like Europa, Titan and Enceladus, and distant planets like Pluto.

In a report presented at the 52nd annual Lunar and Planetary Science Conference (LPSC 52) this week, Southwest Research Institute planetary scientist S. Alan Stern writes that the prevalence of interior water ocean worlds (IWOWs) in our solar system suggests they may be prevalent in other star systems as well, vastly expanding the conditions for planetary habitability and biological survival over time.

It has been known for many years that worlds like Earth, with oceans that lie on their surface, must reside within a narrow range of distances from their stars to maintain the temperatures that preserve those oceans. However, IWOWs are found over a much wider range of distances from their stars. This greatly expands the number of habitable worlds likely to exist across the galaxy.

Worlds like Earth, with oceans on their exterior, are also subject to many kinds of threats to life, ranging from asteroid and comet impacts, to stellar flares with dangerous radiation, to nearby supernova explosions and more. Stern’s paper points out that IWOWs are impervious to such threats because their oceans are protected by a roof of ice and rock, typically several to many tens of kilometers thick, that overlie their oceans.

“Interior water ocean worlds are better suited to provide many kinds of environmental stability, and are less likely to suffer threats to life from their own atmosphere, their star, their solar system, and the galaxy, than are worlds like Earth, which have their oceans on the outside,” said Stern.

He also points out that the same layer of rock and ice that protects the oceans on IWOWs also conceals life from being detected by virtually all astronomical techniques. If such worlds are the predominant abodes of life in the galaxy and if intelligent life arises in them — both big “ifs,” Stern emphasizes — then IWOWs may also help crack the so-called Fermi Paradox. Posed by Nobel Laureate Enrico Fermi in the early 1960s, the Fermi Paradox questions why we don’t see obvious evidence of life if it’s prevalent across the universe.

“The same protective layer of ice and rock that creates stable environments for life also sequesters that life from easy detection,” said Stern.

In 2015, NASA created the Ocean Worlds Exploration Program, which seeks to explore an ocean world to determine habitability and seek life. Moons that harbor oceans under a shell of ice, such as Europa and Titan, are already the targets of NASA missions to study the habitability of these worlds.