Given the scale of the industry and its greenhouse gas emissions, technologies that can reinvent concrete could have profound impacts on climate change. 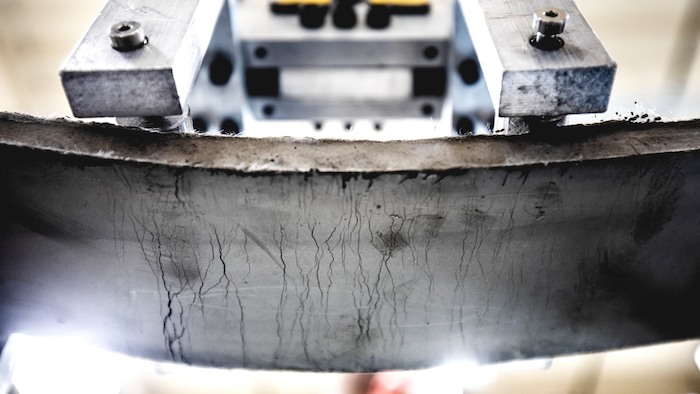 One of the big contributors to climate change is right beneath your feet, and transforming it could be a powerful solution for keeping greenhouse gases out of the atmosphere.

The production of cement, the binding element in concrete, accounted for 7% of total global carbon dioxide emissions in 2018. Concrete is one of the most-used resources on Earth, with an estimated 26 billion tons produced annually worldwide. That production isn’t expected to slow down for at least two more decades.

Given the scale of the industry and its greenhouse gas emissions, technologies that can reinvent concrete could have profound impacts on climate change.

As engineers working on issues involving infrastructure and construction, we have been designing the next generation of concrete technology that can reduce infrastructure’s carbon footprint and increase durability. That includes CO2-infused concrete that locks up the greenhouse gas and can be stronger and even bendable.

The industry is ripe for dramatic change, particularly with the Biden administration promising to invest big in infrastructure projects and cut U.S. emissions at the same time. However, to put CO2 to work in concrete on a wide scale in a way that drastically cuts emissions, all of its related emissions must be taken into account.

Concrete is made up of aggregate materials – primarily rocks and sand – along with cement and water.

Because about 80% of concrete’s carbon footprint comes from cement, researchers have been working to find substitute materials.

Industrial byproducts such as iron slag and coal fly ash are now frequently used to reduce the amount of cement needed. The resulting concrete can have significantly lower emissions because of that change. Alternative binders, such as limestone calcined clay, can also reduce cement use. One study found that using limestone and calcinated clay could reduce emissions by at least 20% while also cutting production costs.

Apart from developing blended cements, researchers and companies are focusing on ways to use captured CO2 as an ingredient in the concrete itself, locking it away and preventing it from entering the atmosphere. CO2 can be added in the form of aggregates – or injected during mixing. Carbonation curing, also known as CO2 curing, can also be used after concrete has been cast.

These processes turn CO2 from a gas to a mineral, creating solid carbonates that may also improve the strength of concrete. That means structures may need less cement, reducing the amount of related emissions. Companies such as CarbonCure and Solidia have developed technologies to use these processes for concrete poured at construction sites and in precast concrete, such as cinder blocks and other construction materials. 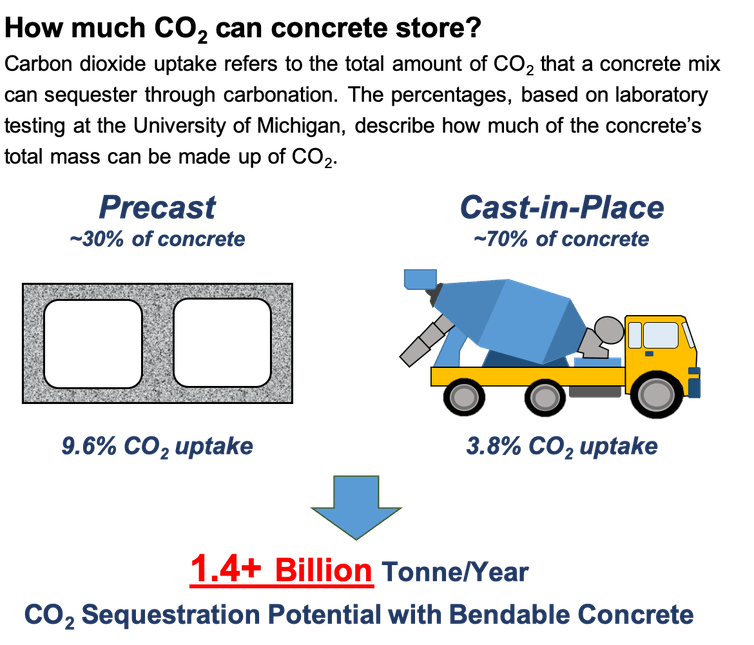 Carbon dioxide can make up a significant percentage of concrete mass.Lucca Henrion/University of Michigan, CC BY-ND

At the University of Michigan, we are working on composites that produce a bendable concrete material that allows thinner, less brittle structures that require less steel reinforcement, further reducing related carbon emissions. The material can be engineered to maximize the amount of CO2 it can store by using smaller particles that readily react with CO2, turning it to mineral.

The challenge of lifecycle emissions

In a study published Feb. 8, three of us looked at the lifecycle emissions from infusing CO2 into concrete and found that estimates did not always account for emissions from CO2 capture, transportation and use. With colleagues, we came up with strategies for ensuring that carbon curing has a strong emissions benefit.

Overall, we recommend developing a standard CO2 curing protocol. Lab experiments show that CO2 curing can improve concrete’s strength and durability, but results vary with specific curing procedures and concrete mixes. Research can improve the conditions and the timing of steps in the curing process to increase concrete’s performance. Electricity use – the largest emissions source during curing – can also be reduced by streamlining the process and possibly by using waste heat.

In 2020, a wide range of companies announced steps to reduce their emissions. However, government investment and procurement policies are still needed to transform the construction industry.

Local governments are taking the first steps. “Low embodied carbon concrete” rules and projects to reduce the amount of cement in concrete have cropped up around the country, including in Marin County, California; Hastings-on-Hudson, New York; and a sidewalk pilot in Portland, Oregon.

Nationally, the crumbling of federally managed infrastructure has been a steadily growing crisis. The Biden administration could start to address those problems, as well as climate change, and create jobs through a strategic infrastructure program.

Secretary of Transportation Pete Buttigieg recently declared that there were “enormous opportunities for job creation, equity and climate achievement when it comes to advancing America’s infrastructure.” Policies that elevate low-carbon concrete to a nationwide climate solution could follow.

This article is republished from The Conversation under a Creative Commons license. Read the original article here: https://theconversation.com/bendable-concrete-and-other-co2-infused-cement-mixes-could-dramatically-cut-global-emissions-152544.