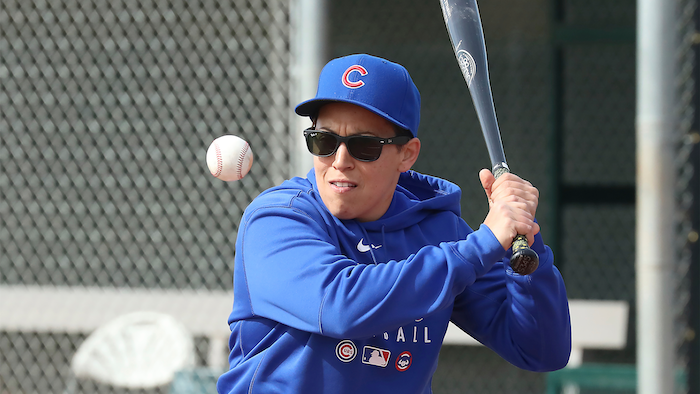 Chicago Cubs minor league hitting coach Rachel Folden hits infield ground balls at the Cubs spring trainng facility in Mesa, Ariz., Feb. 5, 2020. Folden figured something out early on during her first spring training with the Chicago Cubs — long before the coronavirus pandemic wiped out team activities. None of the players care all that much that one of their coaches is a woman.
John Antonoff/Chicago Sun-Times via AP

MESA, Ariz. (AP) — Rachel Folden figured something out early on during her first spring training with the Chicago Cubs — long before the coronavirus pandemic wiped out team activities.

Major League Baseball is pushing the same message. Recognizing the importance of representation when it comes to growing the game, the commissioner's office continues to look at ways to bring more women and minorities into the sport.

The Institute for Diversity and Ethics in Sport (TIDES) at Central Florida gave baseball a C for gender hiring in its most recent diversity report, which was issued last April, down one point from the previous year to 70. But MLB is hoping a hiring spree over the winter is a sign that its Diversity Pipeline Program is working.

Alyssa Nakken became the first female coach on a major league staff when she was named an assistant under new San Francisco Giants manager Gabe Kapler. Folden got a job with the Cubs as their lead hitting lab tech and fourth coach for rookie-level Mesa. Rachel Balkovec was hired as a minor league hitting coach with the New York Yankees.

Veronica Alvarez worked with the Oakland Athletics during spring training for the second straight year, and Christina Whitlock was hired as a minor league coach with the St. Louis Cardinals.

“I’m here for a reason,” Nakken said. “I’m here to make an impact. People are free to think what they want to think, but it goes back to that sense of responsibility. I’m going to come in and grind and hustle and work extremely hard.”

Nakken, Folden, Balkovec, Alvarez and Whitlock have connections to Take The Field, a development program at the winter meetings that is designed to incorporate women into the baseball operations pipeline.

“At Take The Field, we have the opportunity to really put some of the strongest female candidates who are out there in front of staff from the clubs,” said Liz Benn, senior coordinator of labor relations and player programs for MLB. “This year we actually had a bunch of staff reach out to us asking if they could participate in Take The Field and they were really excited to just get in front of the female job candidates and meet them.”

Major League Baseball also is investing more in women's baseball and softball events and programs, looking to identify and establish contact with women interested in working in the game. Baseball's increasing reliance on technology also is creating more opportunities for women.

“It's now become, it's really not as much about your playing background,” said Tyrone Brooks, senior director of MLB's on-field and managerial diversity pipeline program. “It's more about are you having a skillset that can be applied in how a team is going about trying to develop players. Obviously, technology is now playing a bigger and bigger role within player development.”

Folden, 33, is the founder of Folden Fastpitch, a northwest Indiana company that provides baseball and softball instruction based on biomechanics, technology and data. Folden, one of six siblings, played several sports while she was growing up in California, and then was a star slugger for Marshall University's softball team.

Folden also has served as a hitting consultant for Elite Baseball Training, which is run by Justin Stone. While working together on a couple of softball and baseball deals, Folden told Stone she wanted to be involved on the baseball side. So she got an opportunity to be around more baseball people, something she really enjoyed.

Stone then took a position with the Cubs in October.

“When he got hired as the director of hitting, we were driving to Michigan to do a softball consulting deal and he goes, ‘Hey, I got the job with the Cubs,’” Folden recalled. “I knew he was interviewing for it. He goes, ‘I got the job,’ and he goes, ‘I want you to come work with me.’"

Stone recommended Folden for an interview. Matt Dorey, senior director of player development for the Cubs, said the team was impressed.

“We needed to acquire talent that understood a lot of the data-driven initiatives that we were trying to implement,” Dorey said, “and she was a champion in that field.”

Folden said she has been treated like just another coach with Chicago. She spent a lot of time listening early on, looking to learn more about the players and their processes.

“But they do come to me for an opinion every once in a while and you have to be able to provide that,” she said, “and then if it's good information, they don't care, as long as it helps them."

Folden also is sharing her experiences with other women around the game. She texts with Balkovec, and she is in regular contact with Jessica Mendoza after they played against each other in pro softball.

When Balkovec started a fund for COVID-19 relief, Folden contributed and encouraged others to join in the effort.

“A sisterhood if you will, I guess, that sounds so cheesy, but that's kind of what it is,” Folden said. “Where we can get put in touch with each other and it's like we have this common ground. We can talk to each other as if we already know each other, so it's been super helpful to just have that interaction with these women for sure.”