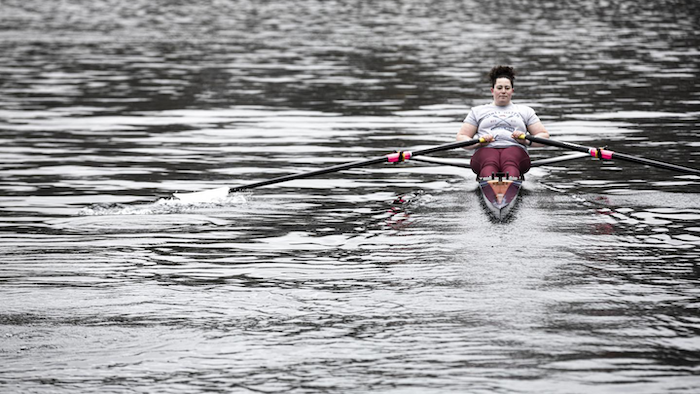 Samantha Kolovson, a UW doctoral student in human centered design and engineering, rowing on Lake Union in Seattle. Kolovson was on the rowing team as an undergraduate at the University of Massachusetts Amherst.
Mark Stone/University of Washington

Fitness trackers like Fitbit and Garmin watches make it easy for anyone to collect data about health and performance.

Now college athletic programs are moving toward implementing more data-driven trackers -- devices or apps that can monitor students' heart rates, sleep or even class attendance -- into their own programs to help keep their athletes as competitive and healthy as possible.

Researchers at the University of Washington were concerned that this shift toward more data collection might encroach on college athletes' autonomy. The team interviewed 22 athletes and staff members from three college athletics programs to see what data they collect and how they use it. The researchers highlighted potential tensions that might arise and made suggestions for increasing transparency to help implement tracking systems in a way that supports both athletes and staff. The team presented these findings Jan. 6 at the ACM Conference on Supporting Group Work in Florida.

"We're at this place where this technology is still in its early stages," said co-author Sean Munson, a UW associate professor of human centered design and engineering. "People are adopting it with a lot of good intentions but not a good understanding of the technology's limitations or how to balance the goals the technology supports with the other goals the team has or that individuals have."

While both professional and college athletic programs track their athletes' fitness, the researchers decided to focus on college athletes.

"They're still learning how to manage their bodies and their sports. And then they've got all this other stuff to do, too," said lead author Samantha Kolovson, a UW doctoral student in human centered design and engineering who rowed as an undergraduate at the University of Massachusetts Amherst. "As a computer science major, I had really tough classes. It was a lot to balance with 20 or so hours of rowing each week. I think the dual demands on student-athletes are one of the things that makes this research really interesting for us."

The researchers contacted 11 athletes and 11 staff members -- sports coaches, athletic trainers, and strength and conditioning coaches -- across three universities that were either Division I or Division III schools. The students and staff participated in multiple sports, including basketball, lacrosse, ice hockey, swimming and rowing. From the interviews, the researchers identified several types of data that coaches collected and determined potential tensions between staff and athletes.

Some of the findings include:

Athletic staff members feel a lot of pressure to use tracker data to get a competitive edge, the researchers said. But this technology is so new that there are no best practices to follow when implementing new methods. To relieve tensions for now, the researchers suggested that staff members and athletes have conversations about tracking to figure how to support athletes without taking away their autonomy.

The researchers also suggested that tracker designers could help by changing the interface of their data management software.

"Often the coaches get a portal where they can see their athletes' data, but the athletes don't have a portal on their side. Or if they do, it's to input something: They'll get a ping about a wellness survey every morning where they have to say 'I got X hours of sleep, I feel sore or don't feel sore,'" Kolovson said. "But if designers could build out that portal on the athletes' side, there is more potential for athletes to learn through self-reflection or communicate about data with the staff."

Now the research team is working on finding ways to avoid potential pitfalls and help coaches identify reasonable goals for collecting and managing their data.

"In this context, the source of the data is the athlete's body. It's not like the number of points you score or your time to run a mile. All this stuff these devices can collect is more personal," Kolovson said. "And while this process is not intending to be malicious, it's set up in a way that augments the staff members' position of power -- they are determining how the data is collected and how the system is set up. We're trying to make sure that people can use these systems in a way that works for everyone."