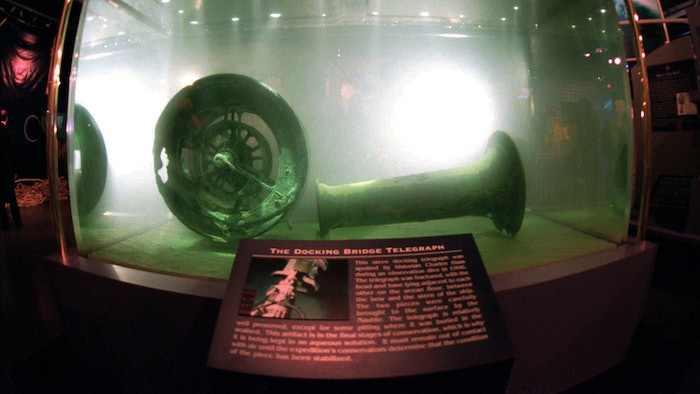 In this Nov. 26, 1996 file photo, the docking bridge telegraph recovered from the wreckage of the Titanic is displayed in a large seawater-filled tank at the Nauticus National Maritime Center in Norfolk, Va. The salvage firm that has plucked artifacts from the sunken Titanic cruise ship over the decades is seeking a judge's permission to rescue more items from the rapidly deteriorating wreck.
AP photo/Steve Helber, File

NORFOLK, Va. (AP) — The salvage firm that has plucked silverware, china and gold coins from the wreckage of the Titanic now wants to recover the Marconi Wireless Telegraph Machine that transmitted the doomed ship's increasingly frantic distress calls.

Lawyers for the company, R.M.S. Titanic, Inc., called witnesses before a federal judge on Thursday to explain why the company should be allowed to possibly cut into the rapidly deteriorating ship to recover the device before it's irretrievable.

“It's one of those iconic artifacts, like the signal flares (that the sinking ship launched),” testified David Gallo, an oceanographer who retired from Woods Hole Oceanographic Institution and is now a paid consultant for the firm.

Gallo, who testified in federal court in Norfolk, Virginia, said that salvaging the device would not be “grave robbery” but a way to connect people to the ship's legacy and honor its passengers.

U. S. District Judge Rebecca Beach Smith, the maritime jurist who presides over Titanic salvage matters, said it was too early for her to make any decisions on the proposal. She said she needed more details and proposed scheduling another hearing sometime in the future.

The Titanic was traveling from England to New York when it struck an iceberg at 11:40 p.m. on April 14, 1912. The large and luxurious ocean liner sent out distress signals using the relatively new Marconi wireless radio system.

The messages in Morse code were picked up by other ships and onshore receiving stations. They included: “We require immediate assistance” ... "Have struck iceberg and sinking" ... "We are putting women off in boats."

The ship sank in less than three hours, with the loss of all but 700 of the 2,208 passengers and crew.

An international team led by oceanographer Robert Ballard located the wreckage in 1985 on the North Atlantic seabed, about 400 miles (645 kilometers) off Newfoundland, Canada.

RMS Titanic Inc., oversees a collection of thousands of items recovered from the site over the years as the court-recognized salvor, or steward of the artifacts.

The company has argued that time is running out to retrieve the telegraph machine. It has been referred to as “the voice” of the Titanic, which also delivered the ship's last words.

The device is located in a room on the ship's deck. A gymnasium on the other side of the grand staircase has already collapsed. The roof above the telegraph machine has begun to perforate.

“I'm not sure if we go in 2020 that the roof won't be collapsed on everything,” testified Paul Henry Nargeolet, director of the company's underwater research program.

The company is already facing resistance from the National Oceanic and Atmospheric Administration, which represents the public's interest in the wreck site.

The U.S. Attorney's Office in Virginia represents NOAA. Its attorneys argued in court documents that the proposed retrieval runs contrary to prior court orders that prohibit the firm from cutting holes or taking items from the wreck.

The items that the firm has salvaged came from a debris field outside the ship.

“It seems clear that this is not simply a ‘one-off’ proposal for the Marconi Wireless Telegraph, but a placeholder for future requests to take similar actions in order to recover other artifacts from inside the wreck,” federal attorney Kent P. Porter wrote.

Porter also wrote that the court must consider international agreements involving the wreck as well as archaelogical standards to determine whether the retrieval is justified. He cited the United Kingdom-based Joint Nautical Archaeology Policy Committee, which said the company has failed to adequately justify its proposal.

Karen Kamuda, president of the Massachusetts-based Titanic Historical Society, Inc., told The Associated Press in an email that the society “has been against disturbing the wreck since 1985 because it is a gravesite.”

“As usual, its all about money,” she wrote.