It's the latest effort to bring passenger vehicles designed in China to the United States. 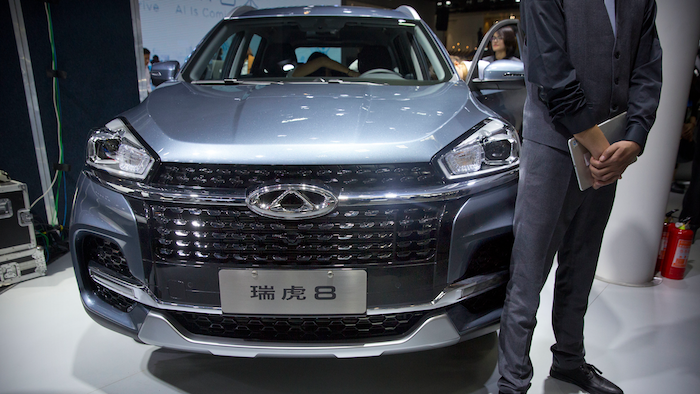 In this April 25, 2018, file photo a staff member stands next to a Tiggo 8 SUV by Chinese automaker Chery after a press conference at the China Auto Show in Beijing.
AP Photo/Mark Schiefelbein, File

DETROIT (AP) — A California company says it will build and sell Chinese-designed automobiles in the U.S. at the end of next year or early in 2022.

HAAH Automotive Holdings says it has an agreement with large Chinese automaker Chery Automobile to provide the vehicles, which will be assembled in a U.S. factory. HAAH says the first vehicle sold will be a midsize SUV.

It's the latest effort to bring passenger vehicles designed in China to the United States, but other efforts so far have seen limited success. GAC Motor of China has appeared at the last two Detroit auto shows to tout plans to enter the American market. But its plans have been delayed until June of this year.

Other Chinese brands have announced U.S. sales plans but have struggled to meet safety and emissions standards.

HAAH of Irvine, California, says it will sell Geely-designed autos under the Vantas brand name. The company will develop a U.S. dealership network and have flexible online sales. HAAH will be recruiting dealers at the National Automobile Dealers Association convention, which starts later this week in Las Vegas.

Chery and HAAH are reviewing sites for a U.S. factory but have not reached a decision, the company said. It is considering existing buildings as well as undeveloped sites.

Initially the SUVs will be assembled from kits to hit HAAH's on-sale target date. But the plant will move to full manufacturing over time, HAAH said. The company didn't give an estimate of how many people the factory will employ.

HAAH also has a partnership with Chinese automaker Zotye Auto, which plans to start selling vehicles in the United States in 2020.