The start-up's founders presented themselves as gurus of campaigning in the digital era. 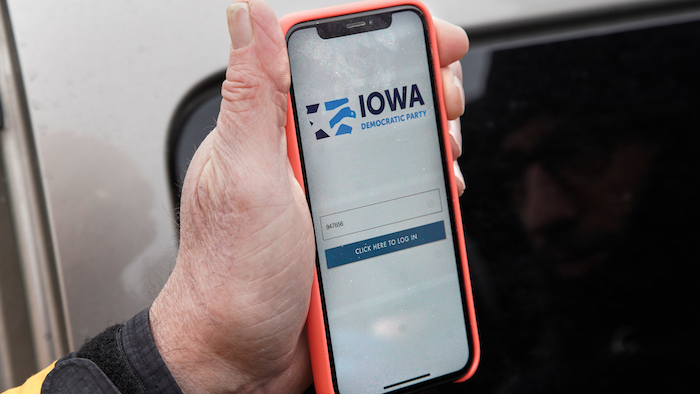 WASHINGTON (AP) — The little-known technology start-up under scrutiny after the meltdown of the Iowa Democratic caucuses on Monday was founded little more than a year ago by veterans of Hillary Clinton’s failed 2016 presidential campaign who had presented themselves as gurus of campaigning in the digital era.

Shadow Inc. was picked in secret by the Iowa Democratic Party after its leaders consulted with the Democratic National Committee on vetting vendors and security protocols for developing a phone app used to gather and tabulate the caucus results.

Party officials in Iowa blamed an unspecified “coding issue” with the software that led to it producing only partial and unreliable results. It did not identify the firm that produced the technology, but campaign disclosure reports show that the Iowa party paid $63,000 to Shadow in late 2019.

After the company came under withering criticism on social media Tuesday, it issued a series of tweets that expressed “regret” over technical glitches which contributed to a delay in the release of results, but stopped short of apologizing.

“We sincerely regret the delay in the reporting of the results of last night’s Iowa caucuses and the uncertainty it has caused to the candidates, their campaigns, and Democratic caucus-goers,” the company posted Tuesday on Twitter. “We will apply the lessons learned in the future, and have already corrected the underlying technology issue. We take these issues very seriously, and are committed to improving and evolving to support the Democratic Party’s goal of modernizing its election processes.”

Shadow Inc. was launched by ACRONYM, a nonprofit corporation founded in 2017 by Tara McGowan, a political strategist who runs companies aimed at promoting Democratic candidates and priorities. McGowan, 34, is married to Michael Halle, a senior strategist for Pete Buttigieg’s presidential campaign, which records show has also paid Shadow Inc. $42,500 for software.

McGowan sought to distance herself from Shadow's IowaReporterApp on Monday night, characterizing the app developer as an “independent” company. In a separate statement, an ACRONYM spokesman said the nonprofit organization is an investor in several companies, including Shadow, but was “eagerly awaiting more information from the Iowa Democratic Party with respect to what happened.”

But business and tax records show ACRONYM and Shadow are registered at the same Washington, D.C., street address, which belongs to a WeWork co-working location. Shadow CEO Gerard Niemira previously served as the chief operating officer and chief technology officer at ACRONYM, according to an online resume.

And on Sunday, McGowan tweeted pictures from a birthday celebration that included her husband and Troy Price, the chairman of the Iowa Democratic Party.

ACRONYM presents itself as a cutting-edge leader when it comes to running political campaigns online. It announced ambitious plans in November to spend $75 million targeting President Donald Trump with online advertising, while irking many party leaders with sharp criticism of other established Democratic groups for not doing enough to combat Trump in the digital space.

So far, Facebook ad disclosures show the group has spent about $700,000 on ads. ACRONYM leaders said in November that they had raised about 40 percent of the $75 million they hoped for. But by the end of 2019, it had raised only about one-tenth of that, according to a disclosure filed Monday with the Federal Election Commission. A separate tax-exempt wing of the group won't have to disclose how much money it has raised to the IRS until next year.

David Plouffe, who helped lead both of former President Barack Obama’s presidential campaigns, joined ACRONYM's board of directors in September.

Just who works at Shadow was not clear on the company's webpage Tuesday. But resumes posted on the online business networking site LinkedIn show the company's top executives all worked in the Clinton campaign's digital operation in 2016.

Niemira, the CEO, was Clinton's director of product, responsible for creating a digital platform for field organizers to contact voters and manage local volunteers “while opening up new avenues of data collection for the campaign.”

James Hickey, Shadow's chief operating officer, was an engineering manager at Hillary for America. Krista Davis, the chief technical officer and chief software architect at Shadow, was a backend engineer for the Clinton campaign.

The month after Clinton's 2016 loss to Trump, Niemira and Davis founded Groundbase, a political technology company that Hickey soon joined. In January 2019, ACRONYM announced via tweet that it had bought Groundbase, which provided a text-messaging software tool for organizing campaign volunteers.

The professional and social connections between Shadow and members of the party's establishment were feeding conspiracy theories Tuesday among some Democrats that something was fishy with the company's glitchy Iowa app — suspicions Trump and his GOP allies were looking to stoke.

“Yea rigging the primary worked wonders for the Democrats last time,” the president's eldest son wrote in a series of tweets. “And by ‘Quality Control’ they mean fixing the results to get the candidate the Democrat Overlords in DC want.”