The new wing replaces the smooth contour found on the leading edges of most airplane wings with a thick flat plate and a sharp leading edge. 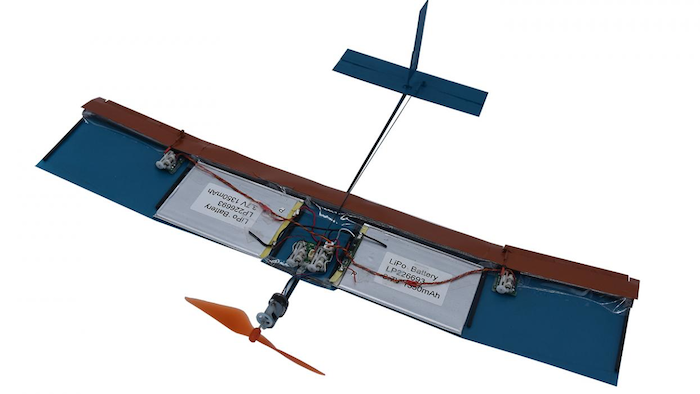 The new wing replaces the smooth contour found on the leading edges of most airplane wings with a thick flat plate and a sharp leading edge. Counterintuitive as it may seem, it turns out that the design has distinct aerodynamic advantages at the scale of small drones.

In a paper published in Science Robotics, the researchers show that the new wing is far more stable than standard wings in the face of sudden wind gusts and other types of turbulence, which often wreak havoc on small aircraft. The wing also provides an aerodynamically efficient flight that translates into better battery life and longer flight times.

"Small drones can be really useful in many applications, including flights in populated areas as they are inherently safer for humans, but there are problems operating aircraft at those small scales," said Kenny Breuer, a professor in Brown's School of Engineering and the study's senior author. "They tend to be inefficient, which limits the battery-powered flight times of most drones to around 30 minutes or so. They also tend to get blown around by puffs of wind and turbulent air coming from obstacles such as buildings and trees. So we've been thinking about a wing design that might combat those problems."

The idea for a wing that dispenses with the smooth contours of a normal wing's leading edge was inspired by natural flyers like birds and insects. A smooth leading edge helps to keep airflow firmly attached to the wing. But bird and insect wings have usually quite rough and sharp leading edges to promote separation of the airflow. Flow separation causes efficiency problems for large aircraft, but it seems to work just fine for birds and insects.

"Animals at small scale don't try to keep the flow attached," Breuer said. "They gave up on that 100 million years ago. Once you stop trying to keep the flow constantly attached, it ironically makes some things easier."

The new wing -- dubbed the "Separated Flow Airfoil" -- was designed by Matteo Di Luca, a graduate student at Brown and the study's lead author. The idea is to intentionally separate the flow at the leading edge, which somewhat counterintuitively causes the flow to reattach more consistently before reaching the trailing edge. That reattachment is aided by a small rounded flap placed near the wing's trailing edge. The design enables more efficient, more stable flight at the scale of aircraft with wingspans of about a foot or less.

Further complicating matters is the freestream turbulence -- gusts of wind, vortices and other disturbances in the surrounding air. That freestream turbulence can suddenly induce turbulence in a boundary layer, which attaches the flow and induces a sudden jolt of increased lift. Rapid lift fluctuations can be more than a drone's control system can handle, leading to unstable flight.

The Separated Flow wing is able to deal with these issues.

"When we purposefully separate the flow at the leading edge, we cause it to immediately become turbulent, which forces it to reattach at a consistent point regardless of atmospheric turbulence" Di Luca said. "That gives us more consistent lift and overall better performance."

Testing of the Separated Flow Airfoil in a wind tunnel showed that the design successfully smoothed out lift fluctuations associated with freestream turbulence. The team also performed wind tunnel tests of a small propeller-driven drone equipped with the Separated Flow wing. Those tests showed that the increased aerodynamic efficiency resulted in a decreased minimum cruise power compared to standard miniature drones. That translates into extended battery life.

"With the prototype we have, we're at a little less than 3 hours of flight time in the wind tunnel," Di Luca said. "The wind tunnel is an idealized environment, so we don't expect it would last quite that long for an outdoor flight. But if it lasts half as long as it did in the wind tunnel, it's still more than twice the flight of commercially available drones."

There are other benefits to the design in addition to better aerodynamic performance. The Separated Flow wing can be far thicker than wings normally used in small drones. That makes the wings structurally stronger so subsystems like batteries, antennas or solar panels can be integrated into the wing. That could reduce the size of an aerodynamically cumbersome fuselage -- or eliminated the need for one altogether.

The researchers have a patent on their design and plan to continue refining it for even better performance.