Imagine a bundle of buzzing robots that cling on each other to create adaptive structures in real time? 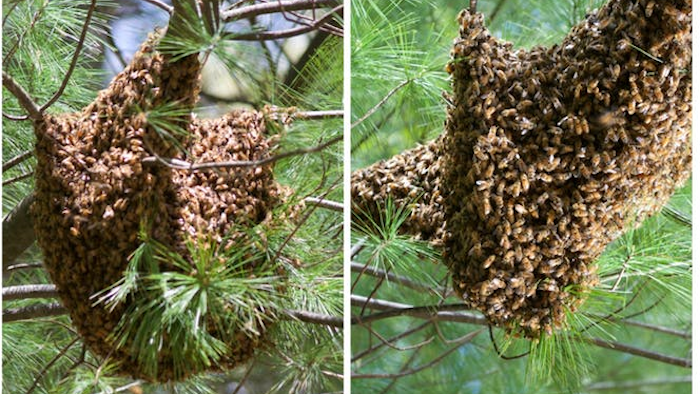 Gathered inside a small shed in the midst of a peaceful meadow, my colleagues and I are about to flip the switch to start a seemingly mundane procedure: using a motor to shake a wooden board. But underneath this board, we have a swarm of roughly 10,000 honeybees, clinging to each other in a single magnificent pulsing cone.

As we share one last look of excited concern, the swarm, literally a chunk of living material, starts to move right and left, jiggling like jelly.

Who in their right minds would shake a honeybee swarm? My colleagues and I are studying swarms to deepen our understanding of these essential pollinators, and also to see how we can leverage that understanding in the world of robotics materials.

Many Bees Create One Swarm

The swarms in our study occur as part of the reproductive cycle of European honeybee colonies. When the number of bees exceeds available resources, usually in the spring or summer, a colony divides into two groups. One group, and a queen, fly away in search of a new permanent location while the rest of the bees remain behind.

During that effort, the relocating bees temporarily form a highly adaptable swarm that can hang from tree branches, roofs, fences or cars. While suspended, they have no nest to protect them from the elements. Huddling together allows them to minimize heat loss to the colder outside environment. They also need to adapt in real time to temperature variations, rain and wind – all of which could shatter the fragile protection they share as one unit.

The swarm is orders of magnitude larger than the size of an individual bee. A bee could potentially coordinate its activity with neighboring bees right next to it, but it certainly couldn’t coordinate directly with any bees at the far edge of the swarm.

So how do they manage to maintain mechanical stability in the face of something like strong wind – a test that requires near simultaneous coordination throughout the entire swarm?

My colleagues Jacob Peters, Mary Salcedo, L. Mahadevan and I devised a series of experiments to address that question — which brings us back to intentionally shaking the swarm.

When we shook the swarm along its horizontal axis, the bees adjusted the shape of their swarm and within minutes became a wider, more stable cone. However, when the motion was vertical, the shape remained constant until a critical force was reached that caused the swarm to break apart.

Why did the bees respond to horizontal shaking, but not to vertical shaking? It’s all about how the bonds bees create by “holding hands” get stretched.

It turns out vertical shaking doesn’t disrupt these pair bonds as much as horizontal shaking does. Using a computational model, we showed that bonds between bees located closer to where the swarm attaches to the board stretch more than bonds between bees at the far tip of the swarm. Bees could sense these different amounts of stretching, and use them as a directional signal to move upwards and make the swarm spread.

In other words, bees move from locations where bonds stretch less, to locations where they stretch more. This behavioral response improves the collective stability of the swarm as a whole at the expense of increasing the average burden experienced by the individual bee. The result is a kind of “mechanical altruism”, as the one bee endures strain for the benefit of the swarm’s greater good.

As a broadly trained physicist studying animal behavior, I am fascinated by this kind of evolved solution in nature. It’s amazing that honeybees can create multi-functional materials – made of their many individual bodies – that can shape shift without a global conductor telling them all what to do. No one is in charge, but together they keep the swarm intact.

What if engineers could take those solutions and lessons from nature and apply them to buildings? Instead of a bundle of buzzing bees, could you imagine a bundle of buzzing robots that cling on each other to create adaptive structures in real time? I can envision shelters that deploy rapidly in the face of natural disasters like hurricanes, or construction materials that can sense an earthquake’s vibrations and respond in the same way that these swarms react to a branch in wind.

Essentially, these bees create an autonomous material that – embedded within itself – has multiple abilities. The swarm can sense information from the nearby environment, based on how much the pair bonds are stretching. It can compute, in the sense that it figures out which regions have more bond stretching. And it can actuate, meaning move in the direction toward more stretching.

These properties are some of the longstanding aspirations in the fields of multi-functional materials and robotics materials. The idea is to combine affordable robots that each have a minimal amount of mechanical components and sensors, like the M-blocks. Together they can sense their local environment, interact with neighboring robots and make their own decisions on where to move next. As Hiro, the young roboticist in the Disney movie “Big Hero 6” says, “The applications to this tech are limitless.”

For the moment, this is still science fiction. But the more researchers know about the honeybees’ natural solutions, the closer we get to making that dream come true.

This article is republished from The Conversation under a Creative Commons license. Read the original article here: http://theconversation.com/what-a-bundle-of-buzzing-bees-can-teach-engineers-about-robotic-materials-125194.