He invented the oversized yellow wedge hat in 1987 from his mother’s couch stuffing. 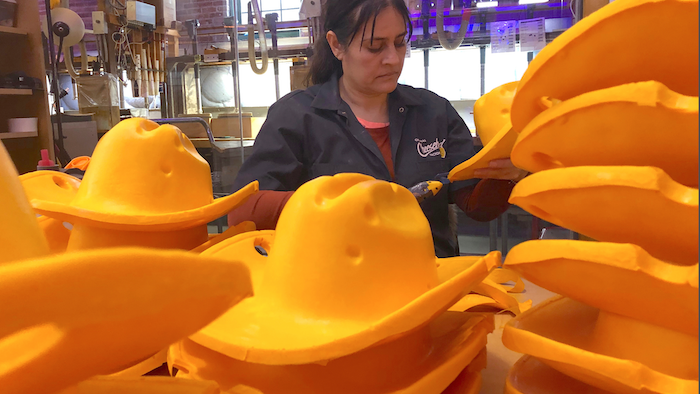 This Jan. 13, 2020 photo shows Maria Hernandez trimming foam cowboy hats at Foamation, Inc. in Milwaukee. Ralph Bruno invented the yellow wedge cheesehead in 1987 from his mother's couch stuffing and it has since become popular, particularly for Wisconsin sports fans and residents. His company, Foamation, Inc., which makes other foam products like these cowboy hats, moved into a new location in 2016 and soon started tours where people can make their own cheeseheads or other foam products.
AP Photo/Carrie Antlfinger

MILWAUKEE (AP) — There’s no milk, bacteria, fermentation or refrigeration at this Wisconsin cheese factory. That’s because they are making foam cheeseheads (view photos in gallery).

Ralph Bruno invented the oversized yellow wedge hat in 1987 from his mother’s couch stuffing and it has since become a popular headpiece, particularly for Wisconsin sports fans and residents.

His company, Foamation Inc., moved into a new Milwaukee location in 2016 and soon started formal factory tours where people can make their own cheeseheads or other foam products.

Tour-goers take a “Wedge of Allegiance” and hear about the history of the building, the company and Bruno himself, with a few cheese jokes thrown in. They also get to see how the foam products are made.

Bruno says his creation has become a symbol of pride for not only Wisconsinites, but for all Midwesterners. He doesn't know exactly how many have been sold, but it's enough to line cheeseheads from New York to the West Coast.

He says sales always pick up when the Packers do well, so sales should be brisk this week with the Green Bay Packers taking on the San Francisco 49ers in Sunday's NFC Championship.