It's critical for the U.S. to find ways to stay ahead in the 'race for innovation.' 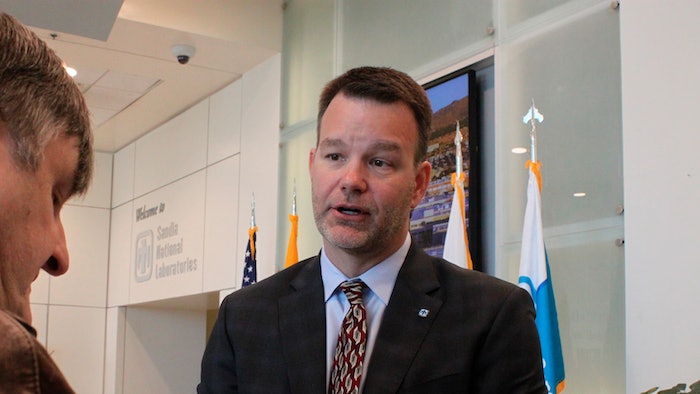 ALBUQUERQUE, N.M. (AP) — With so many threats to peace and stability around the globe, the new leader of the United States' largest federal laboratory said Wednesday that it's critical the nation find ways to stay ahead when it comes to what he described as a “race for innovation.”

James Peery took the helm at Sandia National Laboratories at the start of the year, becoming the 16th director to oversee the lab in its 70-year history. With a multibillion-dollar budget and campuses in New Mexico and California, Sandia focuses on national security work that spans everything from ensuring the safety of the U.S. nuclear arsenal to development of reliable energy sources, nanotechnology and biomedical research.

One of Peery's passions has been finding ways to accelerate innovation, and he said that focus will continue during his tenure.

“As the world becomes more increasingly complex, and national and global security continue to be tested, I'm committed to Sandia Labs' pursuits of peace through innovative science, engineering and technology,” he said, adding that advanced science and visionary research can “change the world.”

Aside from potential military conflicts, Peery said the world also faces a growing threat of natural and man-made disasters and that the lab's scientists and researchers have a role in preparing for and responding to those problems.

Sandia has about 14,000 workers, most based in New Mexico. It recently filled 1,100 new jobs, and lab officials expect some growth over the next year, but Peery said Sandia's challenge now is that it's running out of room to expand.

The lab already leases space throughout Albuquerque ,and officials said they have discussed the value of expanding its campus, which sits at the southern edge of the city and is bordered by Kirtland Air Force Base.

“We're hitting it on every facet to try to explore what we should do, and we're trying to just make sure it fits the needs of our customers,” said Scott Aeilts, an associate director at Sandia.

Lab officials on Wednesday also touted Sandia's economic impact in New Mexico. For the last fiscal year, the lab contributed an all-time high of nearly $3.7 billion to the economy by spending on goods, services, payroll, taxes and other payments.

Aeilts said the goal is to keep growing that number by reaching out to more small businesses. That will include a new effort to work with businesses in southern New Mexico, where lab officials have identified some untapped opportunities.

“We're going to need that going forward,” he said. “There are businesses down there that can help us.”