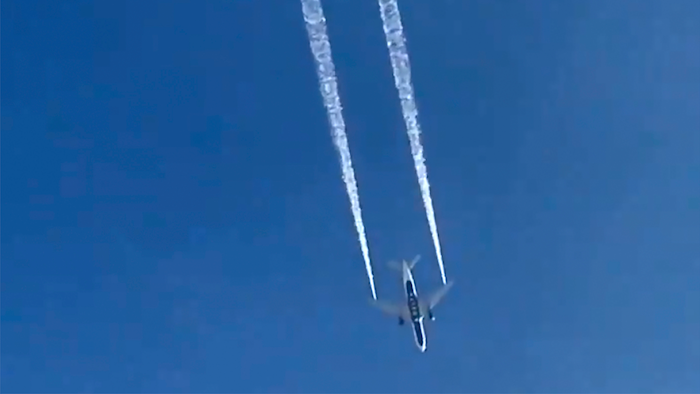 LOS ANGELES (AP) — Some aviation experts said Wednesday that they were puzzled after the crew of a commercial airliner decided to dump fuel at low altitude during an emergency landing, causing a vapor to fall on schoolyards and neighborhoods east of Los Angeles International Airport.

“No one is going to dump fuel where these guys did it over populated areas and schools. It's a pretty outrageous thing,” said Ross Aimer, CEO of Aero Consulting Experts and a retired United Airlines pilot. “They should have gone over the ocean or landed heavyweight.”

Delta Air Lines said Flight 89 to Shanghai had an engine problem after takeoff Tuesday and needed to quickly return. The Boeing 777-200 landed safely after circling back over Los Angeles while dumping fuel to reach a safe landing weight, the airline said in a statement.

When a plane is forced to turn back after takeoff, the weight of a full load of fuel carries a risk of damaging the jet during landing. That can be costly for airlines to fix. And even if there isn’t damage, airlines try to avoid overweight landings because they are required to inspect planes, which puts them out of service.

When turning back with a full fuel load, pilots have three choices, according to John Cox, a safety consultant and former airline pilot: burn the fuel, which can take hours, dump it or land overweight.

In case of a fire, he said, pilots will dump as much fuel as quickly as they can and land. A less dangerous situation tends to lead to using up or dumping fuel.

According to recorded radio communications, air traffic control asked the Delta crew if they wanted to return to LAX immediately or linger over the ocean “to hold and burn fuel."

“We’re going to go ahead,” the pilot or co-pilot responded. “We’ve got it back under control. ... We’re not critical.”

“OK, so you don’t need to hold or dump fuel or anything like that?” the controller asked.

“Ah, negative,” was the response.

But the plane did dump fuel as it headed back.

The Delta crew reported a compressor stall in the engine “but they got the engine back under control ... they were not in an immediate threat condition, and they started out over water,” Cox said. “Why they continued to dump fuel at low altitude when they weren’t in a fuel-dumping area, and didn’t advise ATC (air traffic control) that they were dumping fuel — those are questions this crew is going to have to answer.”

The Federal Aviation Administration said it is investigating, citing procedures that “call for fuel to be dumped over designated unpopulated areas, typically at higher altitudes so the fuel atomizes and disperses before it reaches the ground."

Scott Martin, a propulsion expert at Embry-Riddle Aeronautical University, said a stall puts more pressure on the compressor, and the Delta pilots might have assumed the worst — that they could soon face an engine failure that could cause parts to break off and become shrapnel capable of piercing the fuselage, fuel tanks or hydraulic lines.

That might also explain why they were flying at such low altitude — to avoid putting more stress on the troubled engine, he said.

“They may have decided, ‘We don’t have time to fly higher and dump the fuel, we need to get the fuel off now and get back down to the runway,’” Martin said.

A Delta official spoke at a press conference with school officials Wednesday but offered no further insight into the fuel dumping.

“I know that there are a lot of questions about the process that was followed and those kinds of things,” said Dana Debel, Delta’s managing director of government affairs. “There is an ongoing investigation that was opened immediately after the flight landed back.”

Little is known about the health effects of exposure to kerosene-type jet fuel, according to the federal Health and Human Services Department. Studies using military personnel suggest it can affect the nervous system, but that research involved people who work around jet fuel all the time. Rats that were fed kerosene showed no increase in tumors, the agency said in a 2017 summary.

The Los Angeles County Public Health Department said students that were exposed to the fuel vapor were sent home with instructions on how to clean themselves with soap and water and to thoroughly wash their clothes and to discard them if the odor remained.

“Some exposed individuals have experienced mild symptoms such as skin irritation and upper respiratory irritation such as cough,” the department said in a statement. “These symptoms are generally expected to improve on their own.”

Delta sent cleaning crews to work with Los Angeles Unified School District crews to clean outside areas of the campuses and all reopened Wednesday.