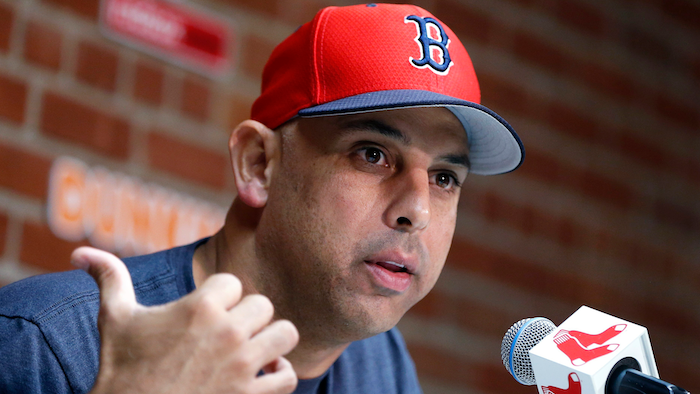 In this Sept. 9, 2019, file photo, Boston Red Sox manager Alex Cora talks about the dismissal of president of baseball operations Dave Dombrowski, during a news conference before the team's baseball game against the New York Yankees in Boston. Cora was fired by the Red Sox on Tuesday, Jan. 14, 2020, a day after baseball Commissioner Rob Manfred implicated him in the sport's sign-stealing scandal.
AP Photo/Michael Dwyer, File

In a sport that's increasingly driven by analytics and advancements, the majority of signs between players and coaches are still transmitted by low-tech hand signals that have been used for decades. Those hand signals are easily captured by the loads of video equipment around MLB stadiums that are used for television, replays and all kinds of stat tracking.

All that technology can be — and obviously has been — used for cheating. The Houston Astros were hit with stiff punishment on Monday after an MLB investigation found the team used electronics to steal signs during the franchise's run to the 2017 World Series title and again in the 2018 season. Manager AJ Hinch and general manager Jeff Luhnow were suspended for a season and then fired by Astros owner Jim Crane.

Boston manager Alex Cora was fired on Tuesday for his involvement with the Astros' scheme and a separate ongoing investigation that involves the Red Sox.

Considering those developments, it might be wise to save players and coaches from themselves.

A partial model is already in place: The NCAA's Southeastern Conference has used electronic communication between coaches and catchers during league games for the past two seasons, which allows the coach to talk strategy with the catcher through an earpiece. It's much like the NFL, where an offensive coach tells plays to a quarterback.

“I don't know why everyone isn't doing it — it's fantastic,” LSU coach Paul Mainieri said. “It allows the coach to speak directly to the catcher and speeds up the game."

In the SEC's system, the catcher still has to relay signs to the pitcher the old-fashioned way with hand signals, but Mainieri said there's no reason why pitchers couldn't eventually be included in the conversation. It's more common for coaches to call pitches in college, while catchers usually handle those responsibilities in the big leagues.

MLB expects to show players some prototypes of pitcher-catcher communication devices at spring training camps this year, but there are no plans to put any of them in place.

It would be unrealistic for a big league catcher to talk with the pitcher with a batter standing right next to him. Ole Miss coach Mike Bianco said there could be ways to work around that problem, suggesting that a clicker or some other device could be employed.

Former MLB catcher Buck Martinez, who played 17 seasons, said the technology is available and today's generation of players would adapt to earpieces quickly if that's the route the sport wanted to take.

“I think most of these younger generation kids have earpieces in their ears most of the time anyway,” Martinez said laughing, referencing the ubiquitous AirPods. “It's just normal. It would just be listening to baseball instead of music.”

Under MLB's current setup, the sport has tried to draw a distinct line about what's allowed and what's not when it comes to sign stealing. It's a legal and time-honored part of baseball as long as it is done with the naked eye. Using technology is prohibited.

There's a wide variety of opinion about how much technological cheating is actually happening and how effective it can be. Arizona Diamondbacks general manager Mike Hazen said in November that he didn't think it was a widespread problem.

“I think MLB has done a really good job of cleaning up all of that stuff. It’s been a topic for a few years," Hazen said shortly after the news broke that the Astros were being investigated by MLB. "There’s a lot of restrictions in place, there’s a lot of guidance in the clubhouse, oversight, in a good way."

But the temptation is everywhere. There are ways to capture just about every movement on a baseball field. Teams measure everything from the launch angle of the baseball off a bat to the spin rate of a pitcher's breaking ball. Video is used to break down the minutiae of a pitcher's motion or a batter's swing in an effort to find any detail that could improve performance.

Computers are even being employed to call balls and strikes at lower levels of the sport and could be coming to the big leagues in the near future.

Yet signs from catcher to pitcher are often fairly easy to decipher, especially with the help of video.

Former big league pitcher Jay Powell, who played 11 seasons and was the winning pitcher in Game 7 of the 1997 World Series with the Marlins, said there would be plenty of logistics to sort out. Infielders might need earpieces, too, since they're often positioned according to the type and location of a pitch.

“It might actually speed up the game," Powell said. “If they ever went that route it would have to be similar how an offensive coordinator communicates with a quarterback — it's live for 10 seconds or five seconds and then it's cut off."

Martinez agreed that something similar might work. He said MLB could also limit access to replay rooms and make sure in-game video wasn't available to players and coaches until after the game.

The answers might not be simple, but the longtime catcher said they need to be found. Baseball should be decided between the players in the game, not by who has the best technology.

“You've got to keep it on the field,” Martinez said. “There's no question.”