The most recent round of guidelines for autonomous vehicle makers rely on voluntary standards despite calls for specific regulations. 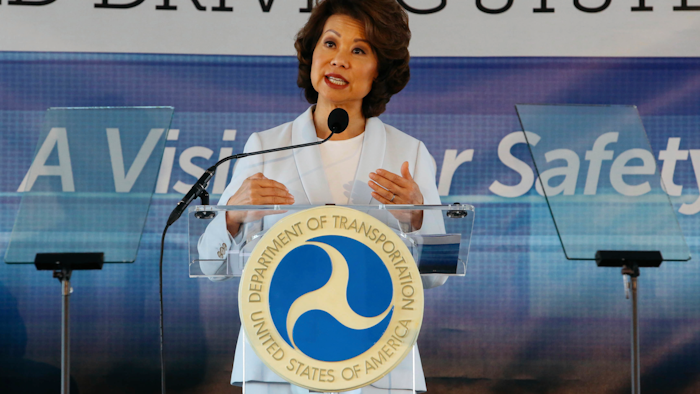 In this Sept. 12, 2017 file photo, U.S. Transportation Secretary Elaine Chao announces new voluntary safety guidelines for self-driving cars during a visit to an autonomous vehicle testing facility at the University of Michigan, in Ann Arbor, Mich. The Trump administration announced its most recent round of guidelines for autonomous vehicle makers, continuing to rely on the industry to police itself despite calls for specific regulations. Chao announced the proposed guidelines in a speech Wednesday, Jan. 8, 2020 at the CES gadget show in Las Vegas, saying in prepared remarks that “AV 4.0” will ensure U.S. leadership in developing new technologies.
Hunter Dyke/The Ann Arbor News via AP, File

The Trump administration on Wednesday unveiled its most recent round of guidelines for autonomous vehicle makers that rely on voluntary standards despite calls for specific regulations.

Transportation Secretary Elaine Chao announced the proposed guidelines in a speech at the CES gadget show in Las Vegas, saying in prepared remarks that “AV 4.0” will ensure U.S. leadership in developing new technologies.

But the guidelines fall short of expectations of auto safety advocates and the National Transportation Safety Board. In November, the NTSB, which investigates crashes and makes safety recommendations, condemned a lack of state and federal regulation for testing autonomous vehicles.

The NTSB said Chao's department failed to lead in regulating the new technology and put autonomous vehicle advancement ahead of saving lives.

In her remarks, Chao said that AV 4.0, a joint effort between her department and the White House, unifies autonomous vehicle work across 38 federal departments and agencies. It also establishes a list of government principles and says that safety is her department's No. 1 priority.

“It recognizes the value of private sector leadership in AV research, development and integration,” she said.

The principles include protecting users and communities, promoting efficient markets by protecting intellectual property and modernizing regulations, and facilitating coordinated standards and policies.

“The goals are simple, clear and consistent,” she said. “Improve safety, security and quality of life for all Americans.”

Other areas of focus include security and cybersecurity, ensuring privacy and data security and enhancing mobility and accessibility.

But the guidelines offer few specifics on how the government will accomplish the goals or put the principles into force.

While the guidelines say that the U.S. government "will promote voluntary consensus standards,” there are few details on what the standards should say.

“Voluntary consensus standards can be validated by testing protocols, are supported by private sector conformity assessment schemes, and offer flexibility and responsiveness to the rapid pace of innovation,” the document says.

The government will enforce existing laws to ensure companies don't make deceptive claims about the capabilities or limitations of autonomous vehicle technology, according to the document.

The guidelines will be published in the Federal Register, followed by a public comment period.

Cathy Chase, president of Advocates for Highway and Auto Safety, a Washington, D.C., nonprofit, called AV 4.0 a “regurgitation” of voluntary standards that have not held the industry accountable.

“I would say it's high on promises and light on detail," she said Wednesday. “This is a science experiment playing out in real time on our roadways without any safeguards or assurances.”

The Trump administration, she said, seems to think that innovation and regulation can't exist at the same time. Her group wants to see the government set minimum standards, like it did with the requirement for seat belts, and let the industry go beyond them.

AV 4.0 comes less than two months after the NTSB criticized another federal agency, the National Highway Traffic Safety Administration, for failing regulate autonomous vehicle testing on public roads. The criticism came just before the board found that a distracted human safety driver was the main cause of a fatal 2018 Arizona crash involving an Uber autonomous test vehicle that ran down a pedestrian.

Among the NTSB's recommendations were that NHTSA require car developers to submit safety reports, and that NHTSA review the plans to make sure companies have safeguards in place that require human safety drivers to pay attention to the road.

Currently the reports are voluntary and only 16 of about 80 companies testing self-driving vehicles have filed them, according to the NTSB.

“The manufacturers are not going to be objective in evaluating their own safety assessments,” NTSB Chairman Robert Sumwalt said at a Senate hearing in November. “There needs to be a federal look at these assessments to make sure that they are done properly."

NHTSA is the government's road safety agency and part of Chao's department. Its acting administrator, James Owens, told senators that the agency will review the NTSB recommendations.

The agency previously has said it doesn't want to stand in the way of innovation in autonomous vehicles because they have tremendous life-saving potential.