Governor Says State May Have to Support Spirit Workers

The Kansas company makes fuselages for the grounded Boeing 737 Max. 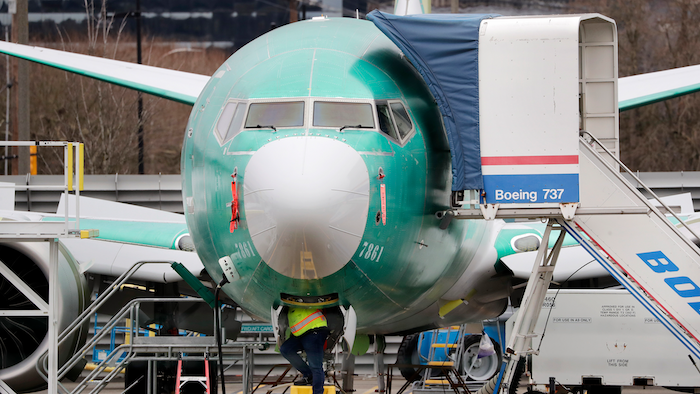 A worker looks up underneath a Boeing 737 MAX jet Monday, Dec. 16, 2019, in Renton, Wash. Shares of Boeing fell before the opening bell on a report that the company may cut production of its troubled 737 MAX or even end production all together.
AP Photo/Elaine Thompson

WICHITA, Kan. (AP) — Kansas may have to help pay workers at a company that makes fuselages for the grounded Boeing 737 Max if the planes don't return to the sky soon, Gov. Laura Kelly said.

Kelly said she talked with Wichita-based Spirit AeroSystems CEO Tom Gentile on Tuesday, one day after Boeing announced that it was temporarily halting production of the 737 Max as it struggles to get approval from regulators to put the plane back in the air, The Wichita Eagle reported.

Although the jet has been grounded since March following a pair of deadly crashes, Spirit has continued to build 737 Max fuselages as well as parts for other planes. It now has dozens of the fuselages lined up on a tarmac near the company’s south Wichita factory.

Kelly said Gentile is optimistic that production of the aircraft will resume soon and that he told her he’s not expecting to have to lay off workers.

“They will need to do some modifications of their work schedules and whatnot,” she said. “What I’ve told Tom was that I’ve already gotten my secretary of labor together with my secretary of commerce and they will be working with Spirit to bring all the resources that the state does have to offer to the table to help Spirit get through this.”

Among those resources, the state may need to use its unemployment system to help pay the workers, Kelly said.

“We’ve done this before, it’s not unusual to go in what we call a shared-work program, for instance, where they remain employees of Spirit, get a reduced paycheck, and we backfill that with unemployment benefits,” Kelly said.

Kansas has had a shared-work program for more than 30 years that allows companies to participate voluntarily as a way to avoid layoffs. The money for the benefits comes from the same fund that pays benefits to unemployed workers and is financed by a tax paid by employers. That fund's current balance is nearly $1 billion, and Kansas Department of Labor officials were confident Tuesday that the state can handle a commitment to Spirit.

Kelly said it’s important to keep the Spirit workers employed so that the city and state don’t lose that talent pool, which will be needed if and when the 737 Max goes back into production.

In 2005, Boeing sold its Wichita and Oklahoma operations. The new company formed to take over those facilities was Spirit AeroSystems. Since then, Spirit has gone from being a single-source supplier for Boeing to becoming an independent global supplier with multiple customers, though Boeing remains its largest customer.

Spirit reported in its third-quarter financial report released last October, that it had continued to produce parts for the 737 MAX program at a rate of 52 aircraft per month. The company reported its third quarter revenue was $1.9 billion, up from the same period in 2018. It said the increase was primarily driven by higher production volumes on the Boeing 777, 787 and Airbus A350 programs.

It's unknown how much the state might end up paying the Spirit workers. A company spokesman said in an email that Spirit has about 13,500 employees in Wichita.