Long gone are the days of the leather shell and single-bar face mask. 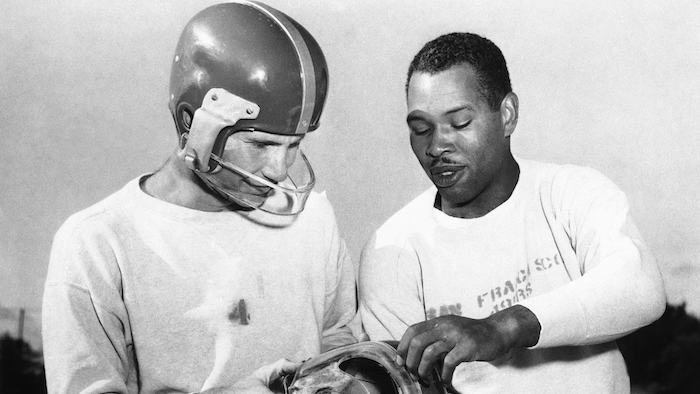 In this, San Francisco 49ers fullback Joe Perry, right, shows quarterback Y. A. Tittle the plastic mask he has worn during the football season to protect his bridgework, during practice at Menlo Park, Calif. Tittle, who suffered a cheekbone fracture against the Detroit Lions, is wearing the mask he has used since. Helmets have evolved from the original hard leather of the NFL’s infancy to hard polycarbonate single-piece shells with various amounts of padding and air bladders that served as the primary form of head protection into the beginning of this century.
AP Photo/File

Today’s football helmets are technological marvels, using cutting edge materials and design elements to make the headgear the safest it’s been in the 100th season of the NFL.

No piece of protective equipment has undergone as much transformation over the past decade as the helmet. Through a combination of technological advancements, investment by the NFL and an open marketplace for development, helmets are rapidly evolving — with more innovation on the horizon.

The helmet will never be expected to fully prevent concussions or other head trauma. But the advancements in recent years are making a major difference, the league says. 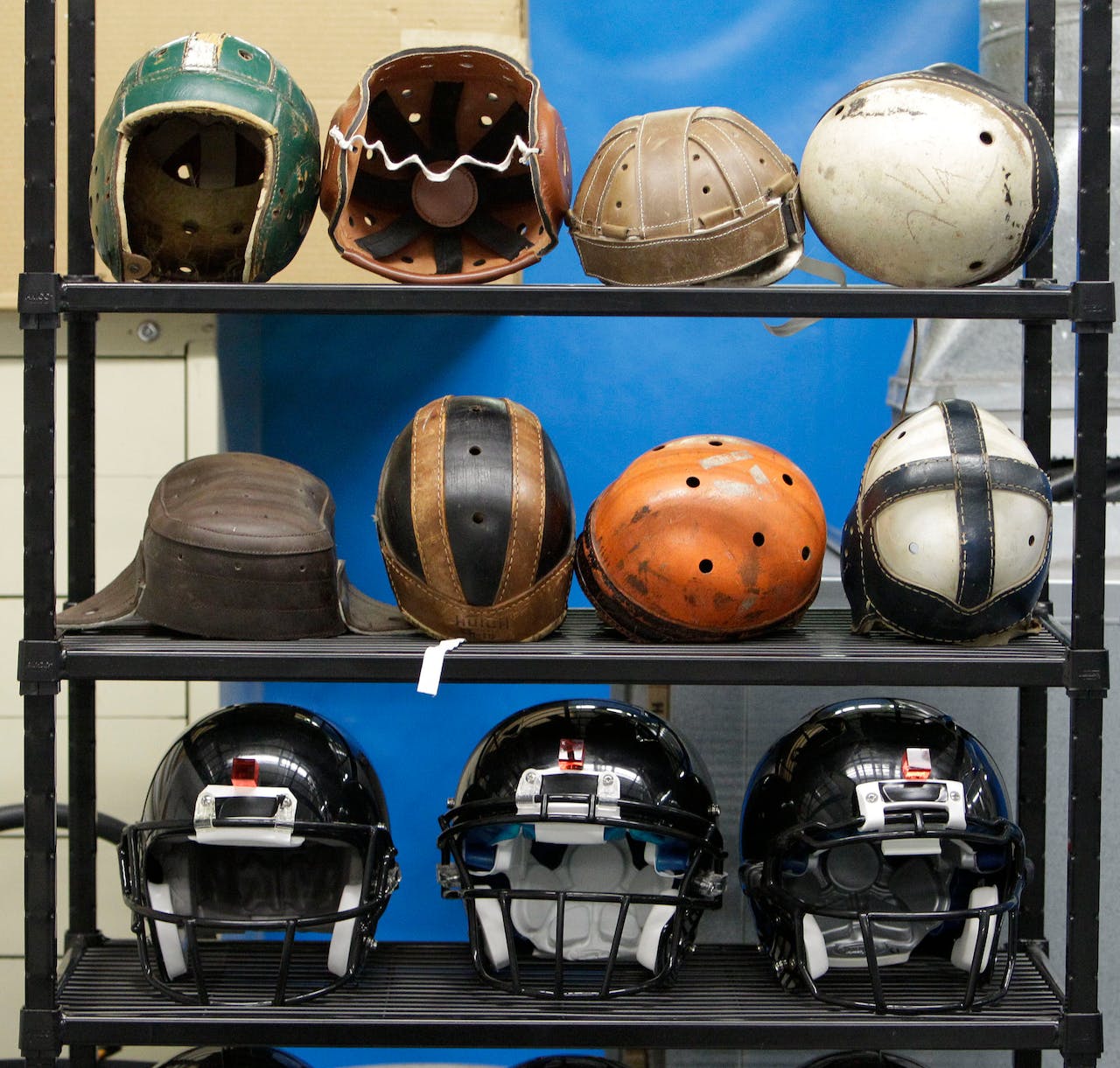 In this Sept. 23, 2010, file photo, various football helmets, used for testing helmet-to-helmet collisions, are displayed on a rack at a laboratory in the Cleveland Clinic's Lutheran Hospital in Cleveland. Helmets have evolved from the original hard leather of the NFL’s infancy to hard polycarbonate single-piece shells with various amounts of padding and air bladders that served as the primary form of head protection into the beginning of this century.AP Photo/Mark Duncan, File

“There is no question there has been significant success from the helmet manufacturer side in terms of building equipment that is more protective than it was four or five years ago,” said NFL executive vice president Jeff Miller.

There are four primary helmet manufacturers currently — legacy brands Riddell and Schutt, along with relative newcomers VICIS and Xenith — with plenty more up-an-coming companies awaiting their opportunity to get into a rapidly growing market, with new materials, new ideas popping up on a regular basis.

And some — the four major brands — put it all together, often using input from current players to create a design they want to wear and provide a combination of maximum usability and safety.

“Competition is good for everybody. Competition keeps everybody moving fast, keeps everybody on their toes and wanting to bring new, better things to the field,” said Thad Ide, senior vice president of research and product development at Riddell.

Helmets have evolved from the original hard leather of the NFL’s infancy to hard polycarbonate single-piece shells with various amounts of padding and air bladders that served as the primary form of head protection into the beginning of this century.

Starting in the early 2000s with Riddell’s Revolution and Schutt’s DNA, helmets began to morph, taking advantage of emerging technologies and an increased focus on concussions. And with those new models coming to market started an increased awareness by the players of what was going on their heads.

“A couple of decades ago I think you would have had a hard time finding guys in the NFL or NCAA locker rooms who knew what helmet they were wearing. They just didn’t pay attention,” said Glenn Beckmann of Schutt Sports. “Now with all the attention and all the conversation and everything we’ve all learned as a society, as a sport, as a manufacturer, as an athlete they realize it’s to their benefit to know what is going on and to use all this information to their advantage.”

Now new helmet designs are hitting the market yearly and being tested in a joint partnership between the NFL and NFL Players Association for certification. In 2019 alone, 11 new helmet models manufactured by the four major companies were tested by the NFL and NFLPA.

And there are other companies waiting for their opportunity to join the NFL marketplace.

“So much of that is yet to be determined in terms of where we're going to head. But I do think that we're going to continue to see innovation and the best way for that to occur is with more competitors as opposed to fewer,” said Nick Esayian, CEO of LIGHT Helmet, which has yet to be tested and approved by the NFL for use.

The NFL deserves credit for stimulating some of the development. The league started its Head Health Challenge earlier this decade, awarding grants to promising technologies. VICIS — the top rated helmet the past three years by the NFL and NFLPA — started in part due to a grant from the league earned through one of the early years of the programs.

Four years ago the NFL created what it calls an engineering road map specifically for helmets. The goal was to collect and analyze as much data as possible to map and track where helmet impacts were occurring, what types of impacts were causing head injuries and have all that information shared with the helmet manufacturers.

The league also created digital finite element models which allowed helmet manufactures the ability to recreate an unlimited number of helmet impacts based on the data collected by the league. That helps to discover new ways to reinforce or alter areas of the helmet that showed to be having repeated impacts.

Think of it like the old crash test dummies from car manufactures. Except technology has allowed all that work to now be done on computers and tested countless times. The results have created opportunity for the helmet manufacturers to analyze where the majority of injury-causing impacts are taking place.

“This is the most focused set of research that we have done on the engineering front against protective equipment,” Miller said. “The original budget for the five-year program was $60 million, and as we make the way through the years we’re staying on budget with that. When we’re done we’ll have spent $60 million.”

So what’s the next big development in an industry where the technology is changing at seemingly a daily rate?

Riddell, for example, has already introduced 3D mapping capabilities which allow the interior fit of the helmet to be customized to the head of each individual player.

“It’s a helmet created for them and only them,” Ide said.

VICIS and Schutt also have customization options to try and improve fit. There is widespread agreement that at the professional level helmets' interior fits will eventually be customized for every player.

But the next big step, and one that could be coming sooner than later, is position-specific helmets that merge the increase in technology with the additional data available on where helmet hits are happening based on players’ positions.

“If we know where he is getting hit, where he is suffering impacts to his helmet and they are in one or two focused areas on his helmet, then that helps manufacturers design helmets that have more protective attributes in that area,” Miller said. “We know when quarterbacks suffer head injuries it’s most often to the back of their head because they’re getting sacked, frequently they’re clutching the ball and they’re not bracing themselves for impact, so the back of their head hits the turf. Why does their helmet look the same in the back as other players look in the back?”

While quarterbacks are an obvious example of how helmets can be designed specific to a position, there is wide opportunity for development. For example, a player on the line of scrimmage — offensive and defensive linemen — have more regular helmet impacts typically to the front area of the helmet because of the nature of the position. But those impacts are at lower speeds.

Whereas defensive backs and wide receivers have fewer helmet impacts, but when they happen they are at higher velocities.

Manufacturers have also started placing sensors in helmets that can provide real-time feedback about the impact forces absorbed by the helmet during a collision. Riddell has used a sensor system in some of its helmets for more than a decade.

Whatever the next big advancement, it will be a joint effort between the helmet manufacturers and the league and players' association in trying to target additional ways to protect players.

“Now that we have captured, collected, collated and analyzed it to share that information back to the helmet manufacturers it’s easier for them to build models that better protect toward the sorts of injuries we see on field,” Miller said.