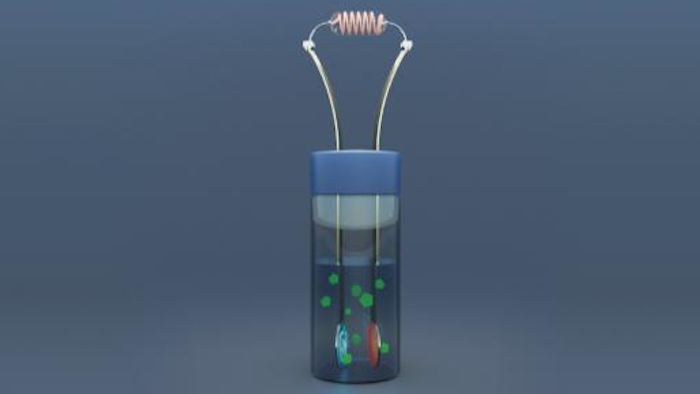 This is a schematic of the all-polymer biofuel cell, which draws energy from the glucose naturally present in saliva.
2019 KAUST; Heno Hwang

An electronic biosensor powered using the glucose in bodily fluids has been developed by King Abdullah University of Science and Technology (KAUST) researchers. The device pairs an electron-transporting polymer with an enzyme that extracts electrons from its reaction with glucose to drive its circuitry. The plastic biosensor could act as a continuous monitor of key health indicators, such as blood sugar levels in diabetes patients.

"Quick, accurate and early detection of abnormalities in metabolism is of paramount importance to monitor, control and prevent many diseases, including diabetes," says David Ohayon, a Ph.D. student in Sahika Inal's lab who led led the research with postdoctoral colleague Georgios Nikiforidis. "Today's glucose monitors are mainly limited to finger-pricking devices, which are often painful," he says. Implantable glucose-sensing devices are being developed, but their batteries complicate implantation and must eventually be recharged or replaced.

An ideal alternative technology would be implantable polymer biosensors that are able to power themselves using molecules around them.

Inal and her team have hit upon a polymer--synthesized by Iain McCulloch's team at KAUST--that appears perfectly suited to the task. "The polymer is an n-type semiconductor, meaning that it can accept and transport electrons along its backbone," Ohayon says. The polymer is coupled with the glucose oxidase enzyme, which oxidatively extracts electrons from its reaction with glucose.

Usually, a third component is required to shuttle the electrons from enzyme to polymer. "These mediators are often toxic and need to be immobilized onto the electrode surface, which complicates device miniaturization and shortens lifetime," Ohayon says.

The new polymer needs no such mediator. "Our polymer seems to be able to host the enzyme in such proximity that it enables efficient electrical communication between the active center and the polymer backbone." The polymer's ethylene glycol side chains are probably the key to the interaction, a hypothesis currently under investigation in collaboration with Enzo di Fabrizo's group at KAUST.

The team used this n-type polymer material in a transistor to sense glucose levels in saliva and also as one half of an all-polymer fuel cell that uses glucose as an energy source to drive the device. "This fuel cell is the first demonstration of a completely plastic, enzyme-based electrocatalytic energy generation device operating in physiologically relevant media," Inal says.

"Glucose sensing and power generation are only two examples of the applications possible when a synthetic polymer communicates effectively with a catalytic enzyme-like glucose oxidase," Inal adds. "Our main aim was to show the versatile chemistry and novel applications of this special water-stable, polymer class, which exhibits mixed conduction (ionic and electronic)."