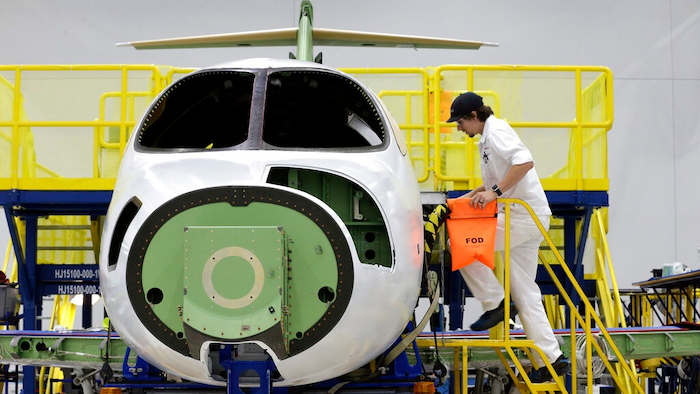 This July 30, 2019 shows a HondaJet Elite aircraft in production at the Honda Aircraft Co. headquarters in Greensboro, N.C. Nearly four years after delivering its first jet, Honda is facing decisions as the company better known for cars and lawnmowers considers whether to sink billions more into its decades-in-the-making aircraft division.
AP Photo/Gerry Broome

GREENSBORO, N.C. (AP) — Nearly four years after delivering its first jet, Honda is facing decisions as the company better known for cars and lawnmowers considers whether to sink billions more into its decades-in-the-making aircraft division.

Honda Aircraft CEO Michimasa Fujino said in an interview that a current plant expansion aimed at improving efficiency is part of the aviation division's long-term strategy and should also slightly increase production of the seven-seat, $5.2 million HondaJet Elites.

"We are looking at this aviation business long-term, not quarterly or annual basis," Fujino said at the company's Greensboro, North Carolina, headquarters. "Our goal is to create new value and new technology ... as a personal mobility company."

But amid environmental concerns about the impact of hydrocarbons burned by jets, fears of a possible global recession and declining profits that have led Honda to retrench its automobile offerings, analysts say the Tokyo-based corporation faces decisions about how much to build its aircraft division.

Whether Honda expands, maintains its current footprint or even scraps its aircraft division is "very much their choice," said Richard Aboulafia, an aerospace analyst at Teal Group.

"They could just stay where they are, say, 'we've got a position in the market, it won't make us much money, but it's good for branding.' Or they could grow an aviation-market presence, and there are many ways they could take that. Or somebody could decide that this thing's a money loser and shut it down," said Aboulafia, who added that he consulted for Honda nearly two decades ago.

It would cost Honda billions of dollars to expand into a family of light jets or establish a sales and support network to match competing jet-makers, Aboulafia said. But such a move would be necessary for growth in an industry where — much like automakers offer models in different sizes and prices — wealthy customers who like Honda's planes may want to buy something nicer, said aviation business analyst Brian Foley, who thinks Honda could announce a new model soon.

"In this industry, you need to have a step up for customers. Just like boat owners, airplane owners — when they're ready to trade in and move up — do that. They move up. They don't move laterally," he said. "So since HondaJet doesn't have a move-up airplane from the current Honda jet that would force the customer to have to jump over into a competitor's airplane."

The company is recruiting engineers with expertise in wing, fuselage and systems design, which indicates they could be developing new models, Foley said.

Meanwhile, Honda reported a 29% profit decline in the quarter ending in June and lowered its profit forecasts for the fiscal year. In May, the company announced it would streamline its auto product offerings, consolidating model variations, and increase parts-sharing to cut costs. The warning signs come as Honda has invested billions in the past year in General Motors' autonomous vehicle unit as automakers look to the future.

On the plus side for its planes, Honda has deep pockets, a history of long-term planning and has stuck with the project despite repeated delays before the first deliveries in December 2015. The company has delivered at least 140 planes since the first model, about the size of two mini-vans, was cleared by the Federal Aviation Administration.

Sales in China, the world's No. 2 economy, began two years ago, and Honda is slated to make its first three jet deliveries into China in the coming months. The trade war and escalating tariffs between the U.S. and China has so far "had a modest impact," which the company wouldn't specify.

That could be because light business aircraft — the class which includes the HondaJet Elite — haven't sold well there, Aboulafia said.

"But also, if you have good efficiency, we can build more" if demand jumps, he said, adding that production should increase slightly from the current rate of four a month.

And Honda's aviation gamble, three decades in the making, is transferring new know-how into other divisions, Fujino said, adding that — as with autonomous vehicles — designing an airplane is only half the task.

The "other 50 percent is how you can prove the safety in case one sensor failed, or if some connector failed," Fujino said. "That kind of technology may not be visible from the general public but that kind of know-how or technology is very critical for Honda to grow in the future."